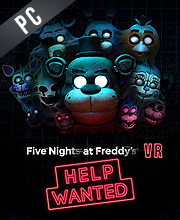 You can participate to these tests by adding comments about your digital download purchase in the store review page. Enjoy the best deals for Five Nights at Freddy's VR Help Wanted CD Key with Allkeyshop.com!

Five Nights At Freddy’s VR: Help Wanted is an action video game that is developed by Steel Wool Studios and published by ScottGames. A VR headset is needed in order to play the game.

Offering a collection of mini-games which are both classic and original that is set in the Five Night universe.

You have been hired! Go around and fix things that needed fixing like a broken ventilation system or animatronics that doesn’t seem to be working but for some reason comes to life at any moment. So many different killer animatronics could be after you like Freddy, Circus Baby, Funtime Foxy, The Mangle, SpringTrap, Foxy, Bonnie and Chica.

An interactive prize counter is available where you can win plushies, bobbleheads, toys and so much candy. There are also some hidden Faz-Tokens that can unlock more rare collectibles.

Hold on to your seats as Five Nights at Freddy’s VR: Help Wanted will bring you along with one heck of a ride.


Steam : STEAM CD KEY : Use the Steam Key Code on Steam Platform to download and play Five Nights at Freddy's VR Help Wanted. You must login to your Steam Account or create one for free. Download the (Steam Client HERE). Then once you login, click Add a Game (located in the bottom Left corner) -> Activate a Product on Steam. There type in your CD Key and the game will be activated and added to your Steam account game library.


Steam gift : STEAM GIFT : A Steam gift is a one-time transfer you receive. You activate and install Five Nights at Freddy's VR Help Wanted to play on Steam, it is a non-refundable game that stays in your Steam games collection. Please read the store description about any language or region restrictions.

This game is a really good vr and non vr game I liked that there is an option for non vr because some people are scared of the vr version and some people don’t have vr and it’s a good game for the price.