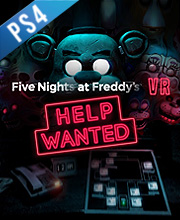 It's a digital key that allows you to download Five Nights at Freddy's VR Help Wanted directly to Playstation 4 from PSN (Playstation network).

Allkeyshop.com compares the cheapest prices of Five Nights at Freddy's VR Help Wanted on the digital downloads market to find the best sales and discount codes on trusted stores.

Be thrilled and experience the Horror of Five Nights at Freddy’s: Help Wanted in VR! This game is a collection of classic and original mini-games set in the Five Nights universe. Survive terrifying encounters with your favorite killer animatronics in a collection of new and classic FIVE NIGHTS AT FREDDY’S™ experiences. Feel the eerie adventure of horror meets fantasy!

Five Nights at Freddy’s VR: Help Wanted is a great introduction to the franchise, packaging a number of levels from various games in the series. Though the first three games are the strongest, some of the other levels are fun in their own right. Less fun is wrestling with the controls, particularly since a giant demonic chicken is going to scream in your face if you mess up. The scares are there, but the controls could use some additional polish.

While it may be difficult to play for very long before your heart rate spikes, it delivers the most consistent and unnerving jumps of any VR horror game out there, held back only by its repetition and lack of variety — both of which are still worth overlooking.