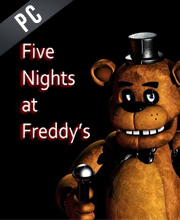 What is Five Nights at Freddys CD key?

It's a digital key that allows you to download Five Nights at Freddys directly to PC from the official Platforms.

How can I find the best prices for Five Nights at Freddys CD keys?

Allkeyshop.com compares the cheapest prices of Five Nights at Freddys on the digital downloads market to find the best sales and discount codes on trusted stores.

It revolves around the story of a fictional pizza restaurant named “Freddy Fazbear’s Pizza”. You will play as the night security guard, and you must defend yourself from the animal characters in the restaurant – tracking their every move using the security cameras installed all over.

As the night guard, your shift will begin from 12:00 AM until 6:00 AM. You have to survive your shift, meaning you have to make it out alive without the animatronic animal robots (who are roaming the place at night) attacking you. You will be sitting in the security office and won’t be able to move around, however, you are given access to view the footage from the security cameras in the restaurant.

You have to be on your guard, though, as not all cameras can be viewed properly – camera feeds are distorted and dimly lit, plus one camera only has an audio feed available. Your form of defense is by closing the doors to the office, or briefly turning on the lights to avoid being attacked.

Doing these actions, however will consume your very limited electrical power, and if it runs out, all cameras won’t be operable, doors won’t close, and lights will go out. At this point, you won’t be able to defend yourself from Freddy, and you’ll eventually lose the game.

The game includes five levels (five nights), and each the difficulty is increased as the level also increases. Completing all five levels will unlock a sixth level, and completing the sixth level unlocks the Custom Night level editor where you will be able to adjust the AI difficulty of each of the characters.

So, are you brave enough to spend your nights at Freddy’s?

Zoom 1m 3m 1y All
Track product
STEAM CD KEY : Use the Steam Key Code on Steam Platform to download and play Five Nights at Freddys. You must login to your Steam Account or create one for free. Download the (Steam Client HERE). Then once you login, click Add a Game (located in the bottom Left corner) -> Activate a Product on Steam. There type in your CD Key and the game will be activated and added to your Steam account game library.
PC Win 10 / Xbox Key. Digital code which allows you to play on both Xbox and Windows 10 PC. See below for more informations.
Bundle
Standard Edition
Compare Choose & Buy Download (772)