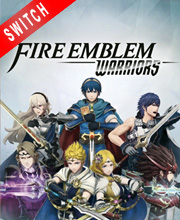 It's a digital key that allows you to download Fire Emblem Warriors directly to Nintendo Switch directly from Nintendo eShop.

How can I find the best prices for Fire Emblem Warriors on Nintendo Switch ?

Allkeyshop.com compares the cheapest prices of Fire Emblem Warriors on the digital downloads market to find the best sales and discount codes on trusted stores.

Fire Emblem Warriors is an action, role-playing game that is developed by Koei Tecmo Games Co., Ltd. and published by Nintendo.

The hack-and-slash video game features Rowan and Lianna as well as others from the Fire Emblem franchise like Chrom, Marth, Ryoma, Xander, and Corrin. A new kingdom awaits as you fight against other soldiers and monsters alike. Pair up with other heroes to make your attacks devastating and give out strategic commands.

Get to unlock all characters in the game. Each character will have unique personalities, moves, weapon types, and special attacks. Still available is the classic weapons triangle that allows players to switch between characters in order to get the advantage over the enemies.

And of course, the amiibo functionality is available. This comes with all the Fire Emblem amiibo figures previously released, in addition to the upcoming Chrom and Tiki amiibo figures.