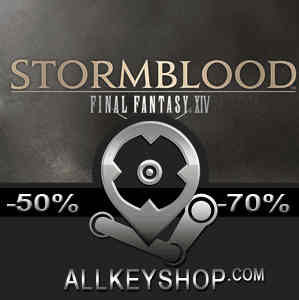 It's a digital key that allows you to download Final Fantasy 14 Stormblood directly to PC from the official Platforms.

How can I find the best prices for Final Fantasy 14 Stormblood CD keys?

Allkeyshop.com compares the cheapest prices of Final Fantasy 14 Stormblood on the digital downloads market to find the best sales and discount codes on trusted stores.

Final Fantasy XIV: Stormblood is a Massively Multiplayer Online (MMORPG) video game developed and published by Square Enix. This is the second expansion pack for the game Final Fantasy XIV.

Stormblood offers a lot of new things. This expansion automatically increases the level cap from 60 to 70. Some changes to the game’s battle system will also be experienced. The item inventory is also expanded and a new gear and crafting recipes are also available.

Get to experience new adventures in Ala Mhigo and Doma. Journey to the Far Eastern city of Kugane. Also, get to explore Gyr Abania, the Ruby Sea, Yanxia, and the Azim Steep, as well as the forbidden land of Eureka. Many more dungeons can be discovered as well.

Choose from the two new jobs, the red mage and the samurai. New primals and beastmen was also added, which are Lakshm, and he Anata, Susano and the Kojin.

Final Fantasy XIV Stormblood is one adventure you wouldn’t want to miss.

Does this include the HeavenSword expansion or I have to buy both?

I like the universe of the FF, i play their games on console, pc and mobile 😀 If you’re like me you shouldn’t miss this tittle.

Cant wait to try out this game. Looks really amazing thanks allkeyshop.com for good game

Awesome game! I like intro and beautiful textures! I never dont playing Final Fantasy, but i watching lot stream and i like the game! I want the game! Best price CDKeys.com in 23.39€..
Nice price! 🙂

this expansion lokks great maybe i should try ff14 again