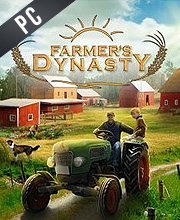 What is Farmers Dynasty CD key?

It's a digital key that allows you to download Farmers Dynasty directly to PC from the official Platforms.

How can I find the best prices for Farmers Dynasty CD keys?

Allkeyshop.com compares the cheapest prices of Farmers Dynasty on the digital downloads market to find the best sales and discount codes on trusted stores.

Farmer’s Dynasty is a simulation, role-playing video game that is developed by UMEO Studios and published by Toplitz Productions.

Ever wondered how the farm life is? How working in the fields would be? Well, look no further as Farmer’s Dynasty: Rise of a Dynasty is here for you.

This is not just any farming sim as you will get to play in a unique mix of building, farming, and life simulation. You will be able to repair, expand and rebuild your farm. Life on the farm would not mean that you will have to live as a hermit, you would still need to earn some Social Points by interacting in an extensive open world.

There will be different characters available each one having special quest lines.

The best part is you are able to control agricultural machine for your farm like tractors.

GOG.COM CD KEY : You need to register on Gog.com, then use the GOG Key to download and activate your game to play Farmers Dynasty.
ORIGIN CD KEY : Use the Origin Key Code (Electronic Arts - EA) on Origin Platform to download and play Farmers Dynasty. You have to login to your Origin Account or create one for free. Download and install the Origin Software HERE) then you can activate the game on it. Once installed, start Origin, click on the Origin Tab and click on Redeem Product Code and just enter the key. The game will appear in your My games list.
EUROPEAN STEAM GIFT : It’s a steam gift for Europe which requires an European IP address to activate and to play Farmers Dynasty on Steam. Read carefully the store description about region and language restrictions.
STEAM GIFT : A Steam gift is a one-time transfer you receive. You activate and install Farmers Dynasty to play on Steam, it is a non-refundable game that stays in your Steam games collection. Please read the store description about any language or region restrictions.
STEAM CD KEY : Use the Steam Key Code on Steam Platform to download and play Farmers Dynasty. You must login to your Steam Account or create one for free. Download the (Steam Client HERE). Then once you login, click Add a Game (located in the bottom Left corner) -> Activate a Product on Steam. There type in your CD Key and the game will be activated and added to your Steam account game library.
Bundle 1
Complete Pack
Deluxe Edition
Early Access
Standard Edition