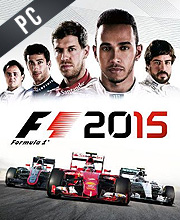 It's a digital key that allows you to download F1 2015 directly to PC from the official Platforms.

Allkeyshop.com compares the cheapest prices of F1 2015 on the digital downloads market to find the best sales and discount codes on trusted stores.

F1 2015 is a racing video game developed and published by Codemasters. This is the 7th Formula One game that has come from the studio.

The game features the line-ups, drivers and teams of the 2015 Season. It will also run on a new version of the game engine Ego, where there is a noticeable upgrade in the physics based handling. It also greatly improved the screen quality and AI capabilities of the game.

Additional enhancements also has been done in significant areas like engine and transmission, aerodynamics, fuel tank, force feedback, suspension, and the new tire physics model – all in all giving the game a believably realistic take on handing the cars in the track.

The drivers, cars and circuits of the 2014 Season will be included as a bonus content. Also, a new feature, the “Pro-Season“, will be available – it is said to be more challenging and the hardest level possible.

This perhaps will be the closest experience that you can get driving the circuits of Formula One. Prepare to be mind blown!

Zoom 1m 3m 1y All
Track product
EU STEAM CD KEY: Requires an EUROPEAN IP address or you must activate it with a VPN (Virtual Private Network) in order to play F1 2015. Might have languages restrictions or language packs. Read the description on the store game page to know if the EU IP is only needed for activation or for playing also (maybe on EU Servers). Most of the stores offer you their help, or show you how to do this with a tutorial to follow.
STEAM CD KEY : Use the Steam Key Code on Steam Platform to download and play F1 2015. You must login to your Steam Account or create one for free. Download the (Steam Client HERE). Then once you login, click Add a Game (located in the bottom Left corner) -> Activate a Product on Steam. There type in your CD Key and the game will be activated and added to your Steam account game library.
Bonus Edition
Bundle
Standard Edition
Compare Choose & Buy Download (791)

Nowadays there is not much sense in buying a simulator game so old but for less than one euro can be done if you never tried F1 games.

For F1 fans and others, this game is a great racing simulator with nice realistic graphics and gameplay!

G2A store is giving it for quite of low price, the game has impressive graphics with its next-gen engine, very worth it buying.

this game is my best racing game …
i love this game and i want play this game with online …
thanks .