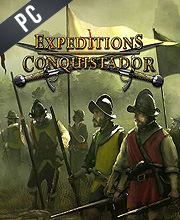 What is Expeditions Conquistador CD key?

It's a digital key that allows you to download Expeditions Conquistador directly to PC from the official Platforms.

How can I find the best prices for Expeditions Conquistador CD keys?

Allkeyshop.com compares the cheapest prices of Expeditions Conquistador on the digital downloads market to find the best sales and discount codes on trusted stores.

Expeditions: Conquistador is a tactical role-playing game developed by Logic Artists and published by BitBomposer.

You play as a Spanish conquistador leading an expedition to South America. You will be responsible for acquiring gold and influencing development needed to sustain your expedition force. While your character does not participate in combat you are given 5 non combat stats including tactics, diplomacy, hunting, leadership and healing.

These statistics are given at the start of the game and can not be leveled up although you will get the opportunity to ably bonuses to them to potentially modify them through various events. You are given an expedition party of ten when you start the game there are five Spanish character types and five native types which you can recruit through out the game. There is a group pool of experience points which can be used to give your followers new skills and unlock new abilities.

Combat is turn based and generally you will be given the option to select six of your followers to send into battle selecting the ones with the appropriate skill to complete the task at hand.

The gameplay itself is enough to keep a player in their seat for long hours of enjoyable exploration.

Expeditions Conquistador is very nice game …
i want play this game really …
and thank you so much .