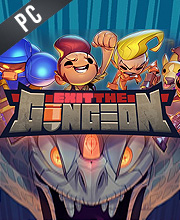 What is Exit The Gungeon CD key?

It's a digital key that allows you to download Exit The Gungeon directly to PC from the official Platforms.

How can I find the best prices for Exit The Gungeon CD keys?

Allkeyshop.com compares the cheapest prices of Exit The Gungeon on the digital downloads market to find the best sales and discount codes on trusted stores.

Exit the Gungeon is an action–adventure video game that is developed by Dodge Roll, Singlecore and published by Developer Digital.

This is the direct spin-off of the Exit Geungeon. As the adventures. Are trying to survive the increasingly dangerous elevators and numerous waves of enemies. The Gungeon has become unstable and is on the verge of collapsing.

As you ascend even further in the Gungeon, your gun will rapidly charge because it has been blessed by the Sorceress’ Magic.

Of you give it your best and the higher combo you get, the more powerful gun will be bestowed upon you.

The pace will be frantic, make sure that you are ready for the fiercest Gundeads. The pace will only be slowing down for you to chat with some familiar characters and also some new ones.

There won’t be any two runs that are the same since rooms, bosses, enemies and so on will be shifting.

GOG.COM CD KEY : You need to register on Gog.com, then use the GOG Key to download and activate your game to play Exit The Gungeon.
EU STEAM CD KEY: Requires an EUROPEAN IP address or you must activate it with a VPN (Virtual Private Network) in order to play Exit The Gungeon. Might have languages restrictions or language packs. Read the description on the store game page to know if the EU IP is only needed for activation or for playing also (maybe on EU Servers). Most of the stores offer you their help, or show you how to do this with a tutorial to follow.
EUROPEAN STEAM GIFT : It’s a steam gift for Europe which requires an European IP address to activate and to play Exit The Gungeon on Steam. Read carefully the store description about region and language restrictions.
STEAM GIFT : A Steam gift is a one-time transfer you receive. You activate and install Exit The Gungeon to play on Steam, it is a non-refundable game that stays in your Steam games collection. Please read the store description about any language or region restrictions.
STEAM CD KEY : Use the Steam Key Code on Steam Platform to download and play Exit The Gungeon. You must login to your Steam Account or create one for free. Download the (Steam Client HERE). Then once you login, click Add a Game (located in the bottom Left corner) -> Activate a Product on Steam. There type in your CD Key and the game will be activated and added to your Steam account game library.
Standard Edition