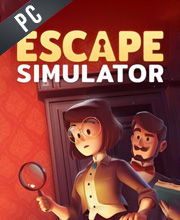 What is Escape Simulator CD key?

It's a digital key that allows you to download Escape Simulator directly to PC from the official Platforms.

How can I find the best prices for Escape Simulator CD keys?

Allkeyshop.com compares the cheapest prices of Escape Simulator on the digital downloads market to find the best sales and discount codes on trusted stores.

A first-person puzzle game called Escape Simulator can be played either by yourself or with a friend online. Investigate a growing collection of escape rooms that offer intense interaction. Smack pots, bust locks, pick everything up and inspect it, move furniture! using the level editor to support community-created rooms.

There’s a co-op mode, even, so you can be trapped in these escape rooms with a chum, which sounds absolutely fantastic. But on my own, Escape Simulator offers a far more tangible sense of the feeling of playing a real-world escape room, one spaceship aside, keeping things within the realms of possibility. Ooh I can’t wait for that DLC.

Aside from some minor technical hitches, though, Escape Simulator is absolutely worth your time. If you and your mates have been craving some escape room action throughout the pandemic, then Escape Simulator is a sure-fire alternative that won’t leave you disappointed.

The Collector Edition contains the base game and the following features:

Zoom 1m 3m 1y All
Track product
GOG.COM CD KEY : You need to register on Gog.com, then use the GOG Key to download and activate your game to play Escape Simulator.
EU STEAM CD KEY: Requires an EUROPEAN IP address or you must activate it with a VPN (Virtual Private Network) in order to play Escape Simulator. Might have languages restrictions or language packs. Read the description on the store game page to know if the EU IP is only needed for activation or for playing also (maybe on EU Servers). Most of the stores offer you their help, or show you how to do this with a tutorial to follow.
EUROPEAN STEAM GIFT : It’s a steam gift for Europe which requires an European IP address to activate and to play Escape Simulator on Steam. Read carefully the store description about region and language restrictions.
STEAM GIFT : A Steam gift is a one-time transfer you receive. You activate and install Escape Simulator to play on Steam, it is a non-refundable game that stays in your Steam games collection. Please read the store description about any language or region restrictions.
STEAM CD KEY : Use the Steam Key Code on Steam Platform to download and play Escape Simulator. You must login to your Steam Account or create one for free. Download the (Steam Client HERE). Then once you login, click Add a Game (located in the bottom Left corner) -> Activate a Product on Steam. There type in your CD Key and the game will be activated and added to your Steam account game library.
Bundle
Collector Edition
Standard Edition
Compare Choose & Buy Download (759)