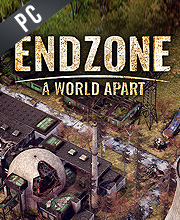 What is Endzone A World Apart CD key?

It's a digital key that allows you to download Endzone A World Apart directly to PC from the official Platforms.

How can I find the best prices for Endzone A World Apart CD keys?

Allkeyshop.com compares the cheapest prices of Endzone A World Apart on the digital downloads market to find the best sales and discount codes on trusted stores.

Prove your worth as a leader in a post-apocalyptic world in Endzone – A World Apart. This strategy, city-builder tasks you into building a settlement in a world ravaged by a nuclear disaster. In the midst of high radiation, extreme climate change, and contaminated rains, can you and your colony survive?

I would have liked to have seen multiple options available Endzone: A World Apart. The ability to have friends play and help as a neighboring town or even be an enemy would have added something a bit more and allowed me to share the experience with my fellow gamers. Whether you are a fan of the genre or just get intrigued by simulators, this title has a bit of everything from experimenting with layout setups and gives players the chance to see how well they would do given the same situation.

Endzone – A World Apart Save the World Edition brings you the base game and the official soundtrack.

Mr. Prepper in the endzone is a bundle that includes Endzone – World Apart and Mr. Pepper

Endzone – A World Apart Complete Edition is the base game with 2 DLCs included.

Save the World Edition

Endzone A World Apart Save the World Edition is the base game with the official soundtrack included.

Endzone Worlds Apart Prosperity is the first DLC expansion for Endzone Worlds Apart it features an expanded library of new technologies. Set after the initial wave of settlers struggled for resources and survival Prosperity sees the colonists, well prospering. Lead this new generation of pioneers into the age of growth and a blossoming new civilization.

Endzone Worlds Apart Distant Places features 12 story-centered, expansive global explorations that will take you to 4 varying biomes; uncertain and daunting yet offer handsome rewards for explorers prepared and bold enough to venture into.

Zoom 1m 3m 1y All
Track product
GOG.COM CD KEY : You need to register on Gog.com, then use the GOG Key to download and activate your game to play Endzone A World Apart.
EU STEAM CD KEY: Requires an EUROPEAN IP address or you must activate it with a VPN (Virtual Private Network) in order to play Endzone A World Apart. Might have languages restrictions or language packs. Read the description on the store game page to know if the EU IP is only needed for activation or for playing also (maybe on EU Servers). Most of the stores offer you their help, or show you how to do this with a tutorial to follow.
EUROPEAN STEAM GIFT : It’s a steam gift for Europe which requires an European IP address to activate and to play Endzone A World Apart on Steam. Read carefully the store description about region and language restrictions.
STEAM GIFT : A Steam gift is a one-time transfer you receive. You activate and install Endzone A World Apart to play on Steam, it is a non-refundable game that stays in your Steam games collection. Please read the store description about any language or region restrictions.
STEAM CD KEY : Use the Steam Key Code on Steam Platform to download and play Endzone A World Apart. You must login to your Steam Account or create one for free. Download the (Steam Client HERE). Then once you login, click Add a Game (located in the bottom Left corner) -> Activate a Product on Steam. There type in your CD Key and the game will be activated and added to your Steam account game library.
Bundle
Complete Edition
Save the World Edition
Special Edition
Standard Edition
Compare Choose & Buy Download (772)

Optimization is good for the progress ingame. It has alot of potential if you like post-apocalyptic titles. The only fun house is a pub, looking forward for more to come. You should get it and join the discord community and help them make a even greater game.