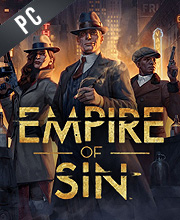 What is Empire of Sin CD key?

It's a digital key that allows you to download Empire of Sin directly to PC from the official Platforms.

How can I find the best prices for Empire of Sin CD keys?

Allkeyshop.com compares the cheapest prices of Empire of Sin on the digital downloads market to find the best sales and discount codes on trusted stores.

Empire of Sin is a strategy role-playing video game developed by Romero Games and published by Paradox Interactive.

Set in the 1920s criminal underworld fo the Prohibition-Era in Chicago. Players would have to create a criminal empire from the ground up. Recruit loyal mobsters and establish your rackets across the neighborhood. This could range from brothels, casinos, protection rackets and so much more. You have to make a name for yourself and build up your influence.

The city has distinct neighborhoods that come with real and historical landmarks as well as events. There is also a full cast of more than 60 characters that you can interact with.

Your influence in important, if you would have to break alliances then do so, expand your crime family, bribe cops, and do trade in the black market. Always keep a mole on the inside so that you will know what is happening.

Be the King or Queen of Chicago. Do it by violence, business smarts, or just city-wide notoriety. Whatever it is, you must come out on top!

STEAM CD KEY : Use the Steam Key Code on Steam Platform to download and play Empire of Sin. You must login to your Steam Account or create one for free. Download the (Steam Client HERE). Then once you login, click Add a Game (located in the bottom Left corner) -> Activate a Product on Steam. There type in your CD Key and the game will be activated and added to your Steam account game library.
EU STEAM CD KEY: Requires an EUROPEAN IP address or you must activate it with a VPN (Virtual Private Network) in order to play Empire of Sin. Might have languages restrictions or language packs. Read the description on the store game page to know if the EU IP is only needed for activation or for playing also (maybe on EU Servers). Most of the stores offer you their help, or show you how to do this with a tutorial to follow.
Standard Edition. Read the store description to know the content.

Be the first one to write a review about Empire of Sin !