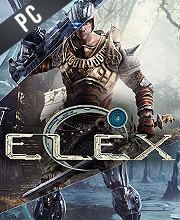 What is Elex CD key?

It's a digital key that allows you to download Elex directly to PC from the official Platforms.

How can I find the best prices for Elex CD keys?

Allkeyshop.com compares the cheapest prices of Elex on the digital downloads market to find the best sales and discount codes on trusted stores.

ELEX or also known as Eclectic, Lavish, Exhilarating, Xenial is an action, adventure, role-playing video game that is developed by Piranna Bytes and published by THQ Nordic.

Set in the world of Magalan who was hit by a huge meteor causing chaos and destruction to the planet. Those who were able to survive are now in mayhem, battling it out to see who is fit to decide the fate of Magalan.

You will be playing as a former member of Albs. Albs is one of the factions formed during the catastrophic event. When you no longer share the vision of Albs, you are tagged as a traitor and is now their enemy.

Along with the meteor that almost wiped out civilization came an element called ELEX. ELEX is very versatile and can be used differently causing the different factions of the planet. The Albs use ELEX to remove emotions leaving them with logical reasoning only. The Berserkers use this element for magical purposes.

Clerics on the other hand use ELEX to power up their machines. And the Outlaws who accepts an “everyone for themselves” philosophy. You will be able to choose from any of these factions to team up with,except the Albs.

Magalan is a seamless open world environment. You will be playing the game through a third-person perspective. Weapons like firearms and swords will be available and magic will come into play later in the game.

What will the future of Magalan be? It is you who holds the key.

Zoom 1m 3m 1y All
Track product
EPIC GAMES KEY : Region Free / Worldwide. Requires Epic Games Launcher App in order to play the game. You need to create a free account here in order to download Elex from Epic Plateform . Read the description on the store page about any language or country restrictions.
GOG.COM CD KEY : You need to register on Gog.com, then use the GOG Key to download and activate your game to play Elex.
ORIGIN CD KEY : Use the Origin Key Code (Electronic Arts - EA) on Origin Platform to download and play Elex. You have to login to your Origin Account or create one for free. Download and install the Origin Software HERE) then you can activate the game on it. Once installed, start Origin, click on the Origin Tab and click on Redeem Product Code and just enter the key. The game will appear in your My games list.
EU STEAM CD KEY: Requires an EUROPEAN IP address or you must activate it with a VPN (Virtual Private Network) in order to play Elex. Might have languages restrictions or language packs. Read the description on the store game page to know if the EU IP is only needed for activation or for playing also (maybe on EU Servers). Most of the stores offer you their help, or show you how to do this with a tutorial to follow.
STEAM CD KEY : Use the Steam Key Code on Steam Platform to download and play Elex. You must login to your Steam Account or create one for free. Download the (Steam Client HERE). Then once you login, click Add a Game (located in the bottom Left corner) -> Activate a Product on Steam. There type in your CD Key and the game will be activated and added to your Steam account game library.
STEAM KEY ROW : It means for Rest Of the World countries which are not concerned by the region restrictions. This product can't be purchased and activated in Several countries. Please read the store description to know the full list of countries which are concerned. Use the key to Download and play Elex on Steam.
Bundle
Standard Edition
Compare Choose & Buy Download (759)

Game is not bad, at start is very hard as you dont have skill and any solid gear and any moster can beat you quickly.. The story is very solid and on quests you need be careful what you as it can turn ending to bad.

Piranhas with thier own magic. This is one of the best. Love this game

I played this game already, and even if it isn’t a very nice game, it’s still good!

Gothic, Risen and now Elex. Th Piranhas Bytes studio, 20 years old already, is launching a new action RPG in beautifull envrinament as usual. Wil the gameplay and the the story not too revolutyionnary for the mass ‘cuphead-PUBG” gamers adopt it ?