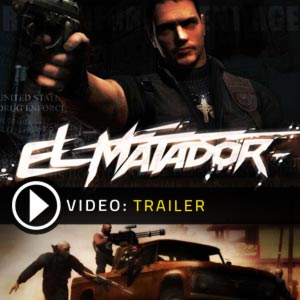 What is El Matador CD key?

It's a digital key that allows you to download El Matador directly to PC from the official Platforms.

How can I find the best prices for El Matador CD keys?

Allkeyshop.com compares the cheapest prices of El Matador on the digital downloads market to find the best sales and discount codes on trusted stores.

El Matador is a third-person shooter developed by Plastic Reality Technologies and published by Cenega Publishing.

El Matador was created using the same game engine as Max Payne and is an unapologetic over-the-top action shooter. It’s very fun to play and absolutely beautiful to look at, it’s simply one of the best looking games released in its year.

Players will take on the role of DEA agent Victor Corbet, tasked with taking down the drug barons. You must locate the encampments, infiltrate the headquarters, and put an end to the cartel’s influence. In a thrilling story of corruption, revenge and morality, the mission briefing is simple: Eliminate the threat, El Matador style.

Gameplay is quite similar to Max Payne. Player can use bullet time and make jumps with aiming. It is also possible to use guns in both hands. Game has realistic physics and a destructible environment you can use to your advantage.

The main point of it is basically you’re going to lead through a rat run of bad guys here and there, and you’ll get to exterminate them with extreme prejudice using variety of weapons from twin pistols, to pistol with scope, twin SMGs, to various assault rifles, sniper rifles, even grenade launcher, RPGs, and LMGs. The realistic physics, interactive environments and destructible objects are the main core of the game’s epicness. No reason to have second thoughts, this game is great.

Zoom 1m 3m 1y All
Track product
GOG.COM CD KEY : You need to register on Gog.com, then use the GOG Key to download and activate your game to play El Matador.
PUBLISHER WEBSITE CD KEY: Use the CD Key Code to download directly on the Official Website or from the store to play El Matador. Follow the instructions given by the store. Verify languages available and possible region restrictions before buying.
EU STEAM CD KEY: Requires an EUROPEAN IP address or you must activate it with a VPN (Virtual Private Network) in order to play El Matador. Might have languages restrictions or language packs. Read the description on the store game page to know if the EU IP is only needed for activation or for playing also (maybe on EU Servers). Most of the stores offer you their help, or show you how to do this with a tutorial to follow.
STEAM CD KEY : Use the Steam Key Code on Steam Platform to download and play El Matador. You must login to your Steam Account or create one for free. Download the (Steam Client HERE). Then once you login, click Add a Game (located in the bottom Left corner) -> Activate a Product on Steam. There type in your CD Key and the game will be activated and added to your Steam account game library.
Standard Edition
Compare Choose & Buy Download (791)

Pretty cool and enjoyable game , i recommend you give it a try .