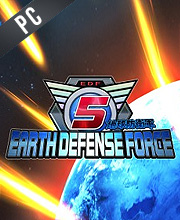 It's a digital key that allows you to download EARTH DEFENSE FORCE 5 directly to PC from the official Platforms.

How can I find the best prices for EARTH DEFENSE FORCE 5 CD keys?

Allkeyshop.com compares the cheapest prices of EARTH DEFENSE FORCE 5 on the digital downloads market to find the best sales and discount codes on trusted stores.

Earth Defense Force 5 is very familiar, but it’s the best game in the series and a huge amount of fun. Fans of action games will find a whole lot to enjoy with this one.

Like its predecessor, Earth Defense Force 5 is a fine jumping-off point for newcomers to the series. The shooting remains as solid as ever, and the concept of mixing in loot drops with blasting large enemy hordes remains enjoyable, even if the whole package isn’t as polished as expected from something with a cult following. However, EDF5 doesn’t surpass the heights of EDF4.1 due to its flaws detracting from the progress of its improvements. The deeper combat thanks to some new enemy types only comes after spending the first two levels doing nothing, and the game is now more stable, but PC fans who’ve waited this long still have to buy the extra missions via DLC. Nevertheless, this is a treat of a game that actions fans will love.

Zoom 1m 3m 1y All
Track product
EU STEAM CD KEY: Requires an EUROPEAN IP address or you must activate it with a VPN (Virtual Private Network) in order to play EARTH DEFENSE FORCE 5. Might have languages restrictions or language packs. Read the description on the store game page to know if the EU IP is only needed for activation or for playing also (maybe on EU Servers). Most of the stores offer you their help, or show you how to do this with a tutorial to follow.
EUROPEAN STEAM GIFT : It’s a steam gift for Europe which requires an European IP address to activate and to play EARTH DEFENSE FORCE 5 on Steam. Read carefully the store description about region and language restrictions.
STEAM GIFT : A Steam gift is a one-time transfer you receive. You activate and install EARTH DEFENSE FORCE 5 to play on Steam, it is a non-refundable game that stays in your Steam games collection. Please read the store description about any language or region restrictions.
STEAM CD KEY : Use the Steam Key Code on Steam Platform to download and play EARTH DEFENSE FORCE 5. You must login to your Steam Account or create one for free. Download the (Steam Client HERE). Then once you login, click Add a Game (located in the bottom Left corner) -> Activate a Product on Steam. There type in your CD Key and the game will be activated and added to your Steam account game library.
Standard Edition
Compare Choose & Buy Download (772)