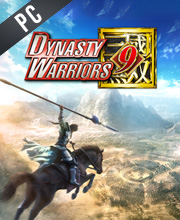 What is Dynasty Warriors 9 CD key?

It's a digital key that allows you to download Dynasty Warriors 9 directly to PC from the official Platforms.

How can I find the best prices for Dynasty Warriors 9 CD keys?

Allkeyshop.com compares the cheapest prices of Dynasty Warriors 9 on the digital downloads market to find the best sales and discount codes on trusted stores.

Dynasty Warriors 9 is hack and slash type of video game, that can be only played as single player. Developed by Omega Force and published by Koei Tecmo, the new game of the series, offers an amazing open world through a single map.

On the new map, that shows a good view of the land of China, players can decide what will happen to their character, according to the chosen mission. The world of the Three Kingdoms if never empty of adventure, so the players will find a variety of strategies and tactics they can use in battles.

The storyline seems to be very exciting as each character will have their own individual ending, they are the ones from previous games of the series, traveling in the open world of China. Dynasty Warriors 9 is a game that every passionate will want to play, at least once.

STEAM CD KEY : Use the Steam Key Code on Steam Platform to download and play Dynasty Warriors 9. You must login to your Steam Account or create one for free. Download the (Steam Client HERE). Then once you login, click Add a Game (located in the bottom Left corner) -> Activate a Product on Steam. There type in your CD Key and the game will be activated and added to your Steam account game library.
EU STEAM CD KEY: Requires an EUROPEAN IP address or you must activate it with a VPN (Virtual Private Network) in order to play Dynasty Warriors 9. Might have languages restrictions or language packs. Read the description on the store game page to know if the EU IP is only needed for activation or for playing also (maybe on EU Servers). Most of the stores offer you their help, or show you how to do this with a tutorial to follow.
Complete Edition. Read the store description to know the content.
Standard Edition. Read the store description to know the content.

Be the first one to write a review about Dynasty Warriors 9 !

good game well worth the money .
keep up the good work allkey

cool looking game hope i try it soon, thanks allkeyshop.

G2PLAY has the cheapest price for this game and it’s also very trustworthy.

hack and slash all the things! dynasty warriors is pretty fun mindless action!