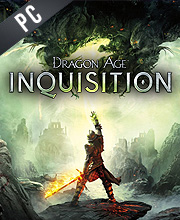 It's a digital key that allows you to download Dragon Age 3 Inquisition directly to PC from the official Platforms.

How can I find the best prices for Dragon Age 3 Inquisition CD keys?

Allkeyshop.com compares the cheapest prices of Dragon Age 3 Inquisition on the digital downloads market to find the best sales and discount codes on trusted stores.

Dragon Age: Inquisition is a game of role-playing from the Dragon Age series, developed by BioWare Corp. and published by Electronics Arts. In 2014, the game won the Best Game of the Year as well as Best RPG Game Awards in 2014 and Best MMORPG at DICE Awards 2015.

You play as one of four available races: Human, Elf, Dwarf or Quinari, and among them mages, thieves and warriors. Each has its own abilities and equipment. Once you reach a certain level, you can also learn a specialty among 3 that are available, which will add new capabilities to your fighting techniques. In addition to these choices comes the creation of the physical character that you can customize to the smallest details.

The story takes place in the vast world of Thedas. Loopholes make their appearances following a mysterious tragedy. The flaws bring destruction and release many demons. The world is Thedas, the gates of chaos. You are the only survivor of the tragedy which is responsible for the appearance of these faults, and the world believes you are guilty.

You are first locked up and interrogated, but Cassandra Pentagon decides to take you to one of the flaws to uncover more answers where you do not seem to remember what really happened. Once at the fault, you discover that a brand that appeared in your hand has the power to close the loopholes. It seems that you are the last hope to save the world!

In terms of multiplayer, you can be part of a team of 4 players where you will cooperate to explore different dungeons. The EXP and gold that are obtained in this way are shared by all team members. You will play as an agent of the Inquisition. Your skills are more specialized than those of the solo mode; the progress is very different, all to highlight the group synergy.

Start your fantastic journey through this vast and beautiful universe. Dragon Age Inquisition is a masterpiece on all levels (graphic, audio, and much more). Do not wait, it is the game that you must absolutely have!

Uncut: Uncensored version of the game; may not be allowed to be activated/played in some countries. Please refer to the seller’s website for complete information on restrictions

Buy it to support EA. They really need any cent you cant give them. There are no more story driven games in the market, and this one is your only option anyway. So buy it. The most important thing is being able to finally play a good game. That’s the only thing that matters. Support EA. They need you.

in Dragon Age: Inquisition. You are the Inquisitor, tasked with saving the world from itself. But the road ahead is paved with difficult decisions, amazing game.

I payed a few money for a great game, I’m very happy I’ve discovered this site!

Very good game , you can bought it it’s very amazing , try it you will enjoy