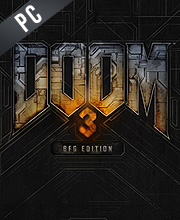 It's a digital key that allows you to download Doom 3 BFG Edition directly to PC from the official Platforms.

How can I find the best prices for Doom 3 BFG Edition CD keys?

Allkeyshop.com compares the cheapest prices of Doom 3 BFG Edition on the digital downloads market to find the best sales and discount codes on trusted stores.

Doom 3 BFG Edition is a re-release of Doom 3. It is an action, first person shooter videogame developed by ID Software and published by Bethesda Softworks.

The BFG Edition features enhanced graphics, better audio with more horror effects, a checkpoint save system, and support for 3D displays and HMDs. The game also includes the previous expansion Resurrection of Evil and a new single-player expansion pack called The Lost Mission. Additionally, it includes copies of the original Doom (the Ultimate Doom edition with the add-on fourth episode, “Thy Flesh Consumed”), and Doom II with the expansion No Rest for the Living. The BFG Edition also features the ability to use the flashlight while holding a weapon, in the form of the so-called armor-mounted flashlight.

Doom 3 is a story-driven action game played from a first-person perspective. As with previous Doom games, the main objective is to successfully pass through its levels, defeating a variety of enemy characters intent on killing the player’s character. Doom 3 was released with a four-player multiplayer element, featuring four game modes: Deathmatch, Team Deathmatch, Last Man Standing, and Tournament.

GOG.COM CD KEY : You need to register on Gog.com, then use the GOG Key to download and activate your game to play Doom 3 BFG Edition.
STEAM CD KEY : Use the Steam Key Code on Steam Platform to download and play Doom 3 BFG Edition. You must login to your Steam Account or create one for free. Download the (Steam Client HERE). Then once you login, click Add a Game (located in the bottom Left corner) -> Activate a Product on Steam. There type in your CD Key and the game will be activated and added to your Steam account game library.
EU STEAM CD KEY: Requires an EUROPEAN IP address or you must activate it with a VPN (Virtual Private Network) in order to play Doom 3 BFG Edition. Might have languages restrictions or language packs. Read the description on the store game page to know if the EU IP is only needed for activation or for playing also (maybe on EU Servers). Most of the stores offer you their help, or show you how to do this with a tutorial to follow.
EUROPEAN STEAM GIFT : It’s a steam gift for Europe which requires an European IP address to activate and to play Doom 3 BFG Edition on Steam. Read carefully the store description about region and language restrictions.
STEAM GIFT : A Steam gift is a one-time transfer you receive. You activate and install Doom 3 BFG Edition to play on Steam, it is a non-refundable game that stays in your Steam games collection. Please read the store description about any language or region restrictions.
Bundle. Read the store description to know the content.
Standard Edition. Read the store description to know the content.

Be the first one to write a review about Doom 3 BFG Edition !

even better, the BFG edition of Doom 3. Now with re-worked graphics, sounds and gameplay 🙂