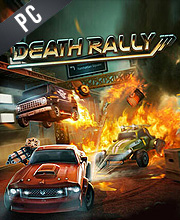 What is Death Rally CD key?

It's a digital key that allows you to download Death Rally directly to PC from the official Platforms.

How can I find the best prices for Death Rally CD keys?

Allkeyshop.com compares the cheapest prices of Death Rally on the digital downloads market to find the best sales and discount codes on trusted stores.

Death Rally is a top-down perspective vehicular combat racing video game developed by Remedy, published by Apogee and distributed by GT Interactive Software. The ultimate goal of the game is to finish in front positions, collecting money bonuses during the race, fulfilling missions, destroying other cars and defeating the “Adversary” in a one-on-one race.

Get on track, load your guns and start your engines because Death Rally’s classic top down racer is back! With a total of 19 tracks and lots of good selection for cars, Death Rally will definitely give you a next level driving experience that’s just too good to be missed. Gain money by destroying all opponents, finishing with 2% or less damage to their car, or winning three races in a row in order to customize and modify your car for it can be equipped with a number of upgrades that increase defensive capabilities (armor), handling (tires) and speed (engine). A modern reincarnation of popular arcade driving that gives an overall positive impression. This old-school playability brings you a lot of “fast & furious” kind of fun.

This is no ordinary joy ride. This is Death Rally. Are you ready to face the challenge and prove yourself worthy into the racing world?

STEAM GIFT : A Steam gift is a one-time transfer you receive. You activate and install Death Rally to play on Steam, it is a non-refundable game that stays in your Steam games collection. Please read the store description about any language or region restrictions.
STEAM CD KEY : Use the Steam Key Code on Steam Platform to download and play Death Rally. You must login to your Steam Account or create one for free. Download the (Steam Client HERE). Then once you login, click Add a Game (located in the bottom Left corner) -> Activate a Product on Steam. There type in your CD Key and the game will be activated and added to your Steam account game library.
Classic Edition
Standard Edition

that game is so amazing

in this release they improved graphics

thanks allkeyshop for added the game 🙂 🙂

ohh a nice option is a very funny game, i recommended !