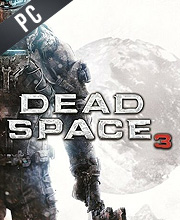 What is Dead Space 3 CD key?

It's a digital key that allows you to download Dead Space 3 directly to PC from the official Platforms.

How can I find the best prices for Dead Space 3 CD keys?

Allkeyshop.com compares the cheapest prices of Dead Space 3 on the digital downloads market to find the best sales and discount codes on trusted stores.

Dead Space 3 is a science fiction survival horror third-person shooter game developed by Visceral Games and published by Electronic Arts (EA). It is the sequel to Dead Space 2 as well as the third entry in the Dead Space series.

The game is set on Tau Volantis, a frozen planet, and it follows the story of the protagonists, Isaac Clarke and John Carver, in their attempt to end the Necromorph (human corpses reanimated by the alien artifact called the Marker) threat. You will play the game as Isaac, while John Carver is the co-op character.

Experience a horror-filled gameplay in Dead Space 3’s full single-player campaign, or in online co-op mode with deadlier evolved enemies and brutal elements waiting to take you on anytime.

A hostile new environment also awaits you with side missions that will allow you to explore not only the planet, but also underworld cities. The game also allows you to build the weapon of your choice through crafting, so searching for and gathering components will also be part of your objectives.

Experience the out-of-this-world thrill that this critically-acclaimed game has to offer. This is the perfect time for you to get yourself playing Dead Space 3!

Doom is over. Where is the next game in THIS series? 🙁

Price from first offer on Origin advertised as 3.99 even though that’s not the price for the game, but for Origin Acces, which would give you acces to the game for a month only.

I have manually updated the price thanks for the report.

The graphics are excellent!
I loved this game and I still play it again even if I sometimes scared.