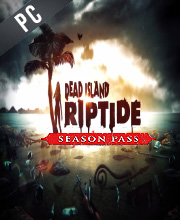 It's a digital key that allows you to download Dead Island Riptide directly to PC from the official Platforms.

How can I find the best prices for Dead Island Riptide CD keys?

Allkeyshop.com compares the cheapest prices of Dead Island Riptide on the digital downloads market to find the best sales and discount codes on trusted stores.

They thought they had escaped the terrors of Banoi and survived the post-apocalyptic event on an infected paradise. They thought wrong. The worst is yet to come. The Dead Island heroes managed to escape in a helicopter to the confines of an ally military ship, but little did they know that there’s an incoming storm that would make the nightmare start all over again. Hope drowned in the rising tides.

With a new playable character, developed skills, cool vehicles to maneuver, locations to explore, and stronger zombies to kill, Dead Island: Riptide delivers a rich gaming experience almost the same as the previous Dead Island. If you loved the first game, this game will offer the same zombie slaying fun that the last game had.

ORIGIN CD KEY : Use the Origin Key Code (Electronic Arts - EA) on Origin Platform to download and play Dead Island Riptide. You have to login to your Origin Account or create one for free. Download and install the Origin Software HERE) then you can activate the game on it. Once installed, start Origin, click on the Origin Tab and click on Redeem Product Code and just enter the key. The game will appear in your My games list.
EU STEAM CD KEY: Requires an EUROPEAN IP address or you must activate it with a VPN (Virtual Private Network) in order to play Dead Island Riptide. Might have languages restrictions or language packs. Read the description on the store game page to know if the EU IP is only needed for activation or for playing also (maybe on EU Servers). Most of the stores offer you their help, or show you how to do this with a tutorial to follow.
STEAM GIFT : A Steam gift is a one-time transfer you receive. You activate and install Dead Island Riptide to play on Steam, it is a non-refundable game that stays in your Steam games collection. Please read the store description about any language or region restrictions.
STEAM CD KEY : Use the Steam Key Code on Steam Platform to download and play Dead Island Riptide. You must login to your Steam Account or create one for free. Download the (Steam Client HERE). Then once you login, click Add a Game (located in the bottom Left corner) -> Activate a Product on Steam. There type in your CD Key and the game will be activated and added to your Steam account game library.
STEAM KEY ROW : It means for Rest Of the World countries which are not concerned by the region restrictions. This product can't be purchased and activated in Several countries. Please read the store description to know the full list of countries which are concerned. Use the key to Download and play Dead Island Riptide on Steam.
Collection
Complete Edition
Definitive Edition
Definitive Collection
Franchise Pack
Standard Edition