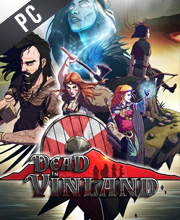 What is Dead In Vinland CD key?

It's a digital key that allows you to download Dead In Vinland directly to PC from the official Platforms.

How can I find the best prices for Dead In Vinland CD keys?

Allkeyshop.com compares the cheapest prices of Dead In Vinland on the digital downloads market to find the best sales and discount codes on trusted stores.

Dead In Vinland is an adventure, simulation, strategy role-playing video game that is developed by CCCP and published by Playdius and Plug-in Digital. This is the second installment of the “Dead In…” games.

Play as the Viking Eirik and his family who were exiled in a faraway land. You must help them survive by managing both their physical and mental health.

The game offers a deep survival management simulation game where players gather and ration resources, take care of mental and physical health, endure the elements, and deal with wounds and diseases.

There are also 3 modes of difficulty in the game: easy, extreme, and iron man. Gameplay is turn-based but with a high challenge.

Players are also able to build camp as well as manage a community with about 14 playable characters. Every single one has their own strengths and stories.

The game’s story is huge with about 70 nonlinear quests. The island will have 150 areas to discover and players would have the chance to not just survive but to settle as well.

Zoom 1m 3m 1y All
Track product
GOG.COM CD KEY : You need to register on Gog.com, then use the GOG Key to download and activate your game to play Dead In Vinland.
EU STEAM CD KEY: Requires an EUROPEAN IP address or you must activate it with a VPN (Virtual Private Network) in order to play Dead In Vinland. Might have languages restrictions or language packs. Read the description on the store game page to know if the EU IP is only needed for activation or for playing also (maybe on EU Servers). Most of the stores offer you their help, or show you how to do this with a tutorial to follow.
EUROPEAN STEAM GIFT : It’s a steam gift for Europe which requires an European IP address to activate and to play Dead In Vinland on Steam. Read carefully the store description about region and language restrictions.
STEAM CD KEY : Use the Steam Key Code on Steam Platform to download and play Dead In Vinland. You must login to your Steam Account or create one for free. Download the (Steam Client HERE). Then once you login, click Add a Game (located in the bottom Left corner) -> Activate a Product on Steam. There type in your CD Key and the game will be activated and added to your Steam account game library.
Bundle
Standard Edition
Compare Choose & Buy Download (772)

This game looks amazing. I can`t wait to play it very very soon!

the prices are nice. but never tried the game but i think its worth giving it a shot

This game is not really my cup of tea, but it certainly looks good.

2Game.com has the best price for Dead In Vinland CD Key

I watched the gameplay trailer and I couldn’t figure out wtf was going on, it looks like an angsty look/pose simulator with RPG elements, it wasn’t until the last 10 seconds of the video that they showed there was action in the game.