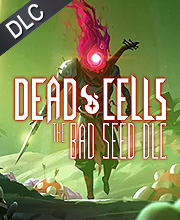 What is Dead Cells The Bad Seed CD key?

It's a digital key that allows you to download Dead Cells The Bad Seed directly to PC from the official Platforms.

How can I find the best prices for Dead Cells The Bad Seed CD keys?

Allkeyshop.com compares the cheapest prices of Dead Cells The Bad Seed on the digital downloads market to find the best sales and discount codes on trusted stores.

Dead Cells: The Bad Seed is an action video game that is developed by Motion Twin and Evil Empire and published by Motion Twin. This is a downloadable content so the base game which is Dead Cells is needed in order to play the game.

The Bad Seed expansion for Dead Cells comes with two new levels as well as each level’s monsters and a new challenging boss.

Players will have a new scythe that they can use to harvest souls with. One of the new levels is the Arboretum which is, in general, a relaxing greenhouse with mushrooms but it also comes with monsters like the Beheaded. The other level is the Swamp which is full of tree-dwelling mutants that have pointy sticks as well as dart shooters.

The swamp is where you will be facing the new boss called the mama Tick. This boss will surely give you a hard time.

GOG.COM CD KEY : You need to register on Gog.com, then use the GOG Key to download and activate your game to play Dead Cells The Bad Seed.
ORIGIN CD KEY : Use the Origin Key Code (Electronic Arts - EA) on Origin Platform to download and play Dead Cells The Bad Seed. You have to login to your Origin Account or create one for free. Download and install the Origin Software HERE) then you can activate the game on it. Once installed, start Origin, click on the Origin Tab and click on Redeem Product Code and just enter the key. The game will appear in your My games list.
EU STEAM CD KEY: Requires an EUROPEAN IP address or you must activate it with a VPN (Virtual Private Network) in order to play Dead Cells The Bad Seed. Might have languages restrictions or language packs. Read the description on the store game page to know if the EU IP is only needed for activation or for playing also (maybe on EU Servers). Most of the stores offer you their help, or show you how to do this with a tutorial to follow.
EUROPEAN STEAM GIFT : It’s a steam gift for Europe which requires an European IP address to activate and to play Dead Cells The Bad Seed on Steam. Read carefully the store description about region and language restrictions.
STEAM GIFT : A Steam gift is a one-time transfer you receive. You activate and install Dead Cells The Bad Seed to play on Steam, it is a non-refundable game that stays in your Steam games collection. Please read the store description about any language or region restrictions.
STEAM CD KEY : Use the Steam Key Code on Steam Platform to download and play Dead Cells The Bad Seed. You must login to your Steam Account or create one for free. Download the (Steam Client HERE). Then once you login, click Add a Game (located in the bottom Left corner) -> Activate a Product on Steam. There type in your CD Key and the game will be activated and added to your Steam account game library.
Windows 10 Global : This is an Worldwide Microsoft code to play on PC for Worldwide . You need to have installed Windows 10 Anniversary Edition update on your PC. Log into your Microsoft account to download and play. Read closely the description given by the store to activate your game.
Bundle
DLC

Cool, even if it’s just 1€ cheaper than regular price, it’s still 1€ saved. Glad you guys are around!