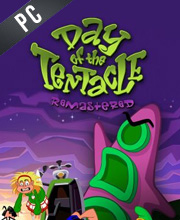 What is Day Of The Tentacle Remastered CD key?

It's a digital key that allows you to download Day Of The Tentacle Remastered directly to PC from the official Platforms.

How can I find the best prices for Day Of The Tentacle Remastered CD keys?

Allkeyshop.com compares the cheapest prices of Day Of The Tentacle Remastered on the digital downloads market to find the best sales and discount codes on trusted stores.

Day of the Tentacle Remastered is an adventure video game developed and published by Double Fine Productions.

The game was originally released in 1993 by Lucas Arts. Three friends will have to work together in order to stop a crazed evil purple tentacle from pursuing world domination.

Now back with a new remastered edition, everything is newly hand-drawn and made in very high resolution making it really beautiful to watch and play as well.

Play as Bernard Bernoulli along with his friends Hoagie and Laverne in this as they give it their best to sabotage the evil disembodied purple tentacle in his plans to take over the whole world.

Stop the tentacle’s plot by going back in time and solving puzzles. Switch from the three playable characters who got separated across time because of a defective time machine. Once they get together, use their full force to go face the purple tentacle.

GOG.COM CD KEY : You need to register on Gog.com, then use the GOG Key to download and activate your game to play Day Of The Tentacle Remastered.
STEAM GIFT : A Steam gift is a one-time transfer you receive. You activate and install Day Of The Tentacle Remastered to play on Steam, it is a non-refundable game that stays in your Steam games collection. Please read the store description about any language or region restrictions.
STEAM CD KEY : Use the Steam Key Code on Steam Platform to download and play Day Of The Tentacle Remastered. You must login to your Steam Account or create one for free. Download the (Steam Client HERE). Then once you login, click Add a Game (located in the bottom Left corner) -> Activate a Product on Steam. There type in your CD Key and the game will be activated and added to your Steam account game library.
Bundle
Standard Edition

This is good Point and click, like old game..is funny! This site is amazing thanks for this price, and this game.. i play this game loot time.

lots of games offer with cheap price
this site is amazing