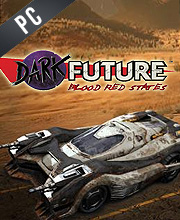 It's a digital key that allows you to download Dark Future Blood Red States directly to PC from the official Platforms.

How can I find the best prices for Dark Future Blood Red States CD keys?

Dark Future Blood Red States is a strategy video game that is developed and published by Auroch Digital.

Set in America and the year is 2023. There is no government to make sure that the rules are being followed. Society is facing so many problems which include pollution, climate change, stagnation as well as gang warfare. The whole world is at the point where it is nearing its end.

You will play as a paid highway warrior and will be offered contracts that would keep some of the laws intact. You will control the dangerous roads as well as battle with the roving gangs in order to make a living.

To do your job, you must customize your vehicle with a variety of armor, weapons, and upgrades. Make sure that your customizations fit your playstyle.

Combat looks amazing with great physics and visual effects all thanks to Unreal Engine 4.

Get to roll out into the Big Empathy with your decked out vehicle and keep your guards up amidst the destruction, and danger.

EPIC GAMES KEY : Region Free / Worldwide. Requires Epic Games Launcher App in order to play the game. You need to create a free account here in order to download Dark Future Blood Red States from Epic Plateform . Read the description on the store page about any language or country restrictions.
GOG.COM CD KEY : You need to register on Gog.com, then use the GOG Key to download and activate your game to play Dark Future Blood Red States.
STEAM CD KEY : Use the Steam Key Code on Steam Platform to download and play Dark Future Blood Red States. You must login to your Steam Account or create one for free. Download the (Steam Client HERE). Then once you login, click Add a Game (located in the bottom Left corner) -> Activate a Product on Steam. There type in your CD Key and the game will be activated and added to your Steam account game library.
Standard Edition