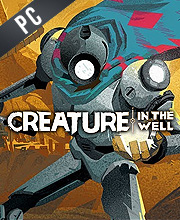 What is Creature in the Well CD key?

It's a digital key that allows you to download Creature in the Well directly to PC from the official Platforms.

How can I find the best prices for Creature in the Well CD keys?

Allkeyshop.com compares the cheapest prices of Creature in the Well on the digital downloads market to find the best sales and discount codes on trusted stores.

Creature in the Well is a top-down action game published and developed by Flight School Studio for PC.

The game draws inspiration from the celebrated arcade game named pinball. With said inspiration, the developers were able to make an amazing hack and slash dungeon crawler game. In the game you play as the last remaining BOT-C unit. You are tasked with journeying deep into a desert mountain to restore power to an ancient facility. The facility is inhabited by a creepy a desperate Creature. In your quest, you must source and upgrade powerful gear in order to save the city of Mirage from a deadly sandstorm.

Defeat the Creature: Escape the many challenges thrown at you by the Creature to eventually lock horns with the despicable being in impressive confrontations. The deeper you delve into the mountain, the more you will unlock. You will eventually unlock the eight dungeons, each filled with unique gameplay themes, unlockables, and secrets to uncover. For combat, you must charge energy orbs and have them ricochet in order to awaken the dormant machinery. The game features over 20 unique items with which you can customize your gear according to your preference.

EPIC GAMES KEY : Region Free / Worldwide. Requires Epic Games Launcher App in order to play the game. You need to create a free account here in order to download Creature in the Well from Epic Plateform . Read the description on the store page about any language or country restrictions.
GOG.COM CD KEY : You need to register on Gog.com, then use the GOG Key to download and activate your game to play Creature in the Well.
STEAM CD KEY : Use the Steam Key Code on Steam Platform to download and play Creature in the Well. You must login to your Steam Account or create one for free. Download the (Steam Client HERE). Then once you login, click Add a Game (located in the bottom Left corner) -> Activate a Product on Steam. There type in your CD Key and the game will be activated and added to your Steam account game library.
PC Win 10 / Xbox Key : This is a Microsoft Xbox Play Anywhere code to play on PC and Xbox One and XBOX X|S. You need to have installed Windows 10 Anniversary Edition update on your PC or the latest update on your Xbox console. Log into your Microsoft account to download and play. Read closely the description given by the store to activate your game.
Standard Edition