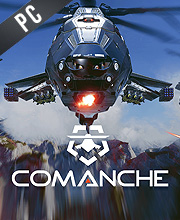 What is Comanche CD key?

It's a digital key that allows you to download Comanche directly to PC from the official Platforms.

How can I find the best prices for Comanche CD keys?

Allkeyshop.com compares the cheapest prices of Comanche on the digital downloads market to find the best sales and discount codes on trusted stores.

Comanche is an action, simulation video game developed by Nukklear and published by THQ Nordic.

The US army has secretly revived the development of the RAH-66 helicopter program after one of their UAV (unarmed aerial vehicles) got hacked during the Iran-US RQ170 incident. The goal of the US army is to develop a high maneuverable and highly advanced stealth war machine. The result was the Comanche special units.

However, the blueprints leaked and now everybody has the information to create their own. This started the era of the helicopter warfare.

Play in the single-player mode where you get to test your skills through explosive conflicts that extends on a global scale.

There are also multiplayer modes to enjoy like Infiltration which is an objective-based competitive tactical team multiplayer. Offering 4 by 4 battles with different Comanche and drone modes to choose from. Another mode is the Blackbox which is a team death-match, get to coordinate with your team to perform the fastest way to get as much takedowns as possible.

EPIC GAMES KEY : Region Free / Worldwide. Requires Epic Games Launcher App in order to play the game. You need to create a free account here in order to download Comanche from Epic Plateform . Read the description on the store page about any language or country restrictions.
GOG.COM CD KEY : You need to register on Gog.com, then use the GOG Key to download and activate your game to play Comanche.
EU STEAM CD KEY: Requires an EUROPEAN IP address or you must activate it with a VPN (Virtual Private Network) in order to play Comanche. Might have languages restrictions or language packs. Read the description on the store game page to know if the EU IP is only needed for activation or for playing also (maybe on EU Servers). Most of the stores offer you their help, or show you how to do this with a tutorial to follow.
STEAM CD KEY : Use the Steam Key Code on Steam Platform to download and play Comanche. You must login to your Steam Account or create one for free. Download the (Steam Client HERE). Then once you login, click Add a Game (located in the bottom Left corner) -> Activate a Product on Steam. There type in your CD Key and the game will be activated and added to your Steam account game library.
STEAM KEY ROW : It means for Rest Of the World countries which are not concerned by the region restrictions. This product can't be purchased and activated in Several countries. Please read the store description to know the full list of countries which are concerned. Use the key to Download and play Comanche on Steam.
Early Access
Standard Edition
Compare Choose & Buy Download (743)