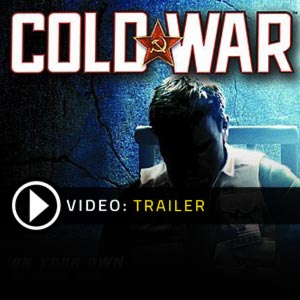 What is Cold War CD key?

It's a digital key that allows you to download Cold War directly to PC from the official Platforms.

How can I find the best prices for Cold War CD keys?

Allkeyshop.com compares the cheapest prices of Cold War on the digital downloads market to find the best sales and discount codes on trusted stores.

Cold War is an action game developed by Mindware Studios and published by Nordic Games.

The game uses a stealth-action gameplay system, and your main goal is to steal weapons, improvise gadgets, evade capture, and uncover a conspiracy.

You will take on the role of Matt Carter, a freelance journalist who’s also on the run for the sake of his life. Stripped of all his possessions, beaten unconscious, and thrown into prison, you are now on your own against forces that are aiming to take control of the USSR.

With only recovered weapons and improvised gadgets available for you to use, you have to eliminate and evade enemies in order to defeat the conspiracy, or risk being killed or sent to a remote Siberian prison camp.

Cold War features a non-linear world where you can accomplish objectives in a lot of ways. Authentic recreations of real Soviet locations are also waiting to be explored.

Complete missions and use your guts to take on enemies in stealth, or by using brute force. Spy on your enemies using the powerful x-ray camera. Collect and combine objects see what useful and deadly gadgets you can create.

PUBLISHER WEBSITE CD KEY: Use the CD Key Code to download directly on the Official Website or from the store to play Cold War. Follow the instructions given by the store. Verify languages available and possible region restrictions before buying.
STEAM CD KEY : Use the Steam Key Code on Steam Platform to download and play Cold War. You must login to your Steam Account or create one for free. Download the (Steam Client HERE). Then once you login, click Add a Game (located in the bottom Left corner) -> Activate a Product on Steam. There type in your CD Key and the game will be activated and added to your Steam account game library.
Standard Edition