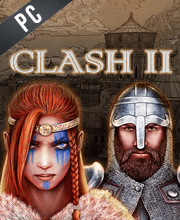 It's a digital key that allows you to download Clash 2 directly to PC from the official Platforms.

How can I find the best prices for Clash 2 CD keys?

Allkeyshop.com compares the cheapest prices of Clash 2 on the digital downloads market to find the best sales and discount codes on trusted stores.

A turn-based strategy game set in a magically-rich universe, Clash II. Explore a forgotten realm filled with mystical animals while immersing yourself in its past. Build up your army, enhance your heroes, and extend your fortress! Decide the outcome of the continent by taking the lead on one side of the war!

Zoom 1m 3m 1y All
Track product
GOG.COM CD KEY : You need to register on Gog.com, then use the GOG Key to download and activate your game to play Clash 2.
STEAM CD KEY : Use the Steam Key Code on Steam Platform to download and play Clash 2. You must login to your Steam Account or create one for free. Download the (Steam Client HERE). Then once you login, click Add a Game (located in the bottom Left corner) -> Activate a Product on Steam. There type in your CD Key and the game will be activated and added to your Steam account game library.
Standard Edition
Compare Choose & Buy Download (791)