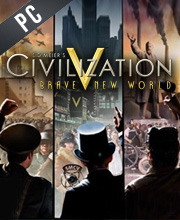 It's a digital key that allows you to download Civilization V Brave New World directly to PC from the official Platforms.

How can I find the best prices for Civilization V Brave New World CD keys?

Play from the ancient era to modern day as the Flagship turn-based strategy game returns. Rule the World by establishing and leading a civilization from the dawn of man into the space age: Wage war, conduct diplomacy, discover new technologies, go head-on with some of history’s greatest leaders and build the most powerful empire the world has ever known.

Strategically planning out what to research, produce, where to attack or settle in is a crucial part of the game. You pick the pace, map, civilization and everything. So much content to explore and not only that! It presents a great single or multiplayer option!

Civilization V lacks nothing on graphics or gameplay, in fact it is topnotch!  Multiplayer can be really fun specially if played with friends. Compete with Civilization V  players all over the world or locally in LAN matches, mod the game in unprecedented ways, and install mods directly from an in-game community hub without ever leaving the game.

This is an awesome expansion pack. New civs to play, new game mechanics, completely re-worked Cultural Victory option. A fun game with great content and endless hours of gameplay? What more can you ask for!

EU STEAM CD KEY: Requires an EUROPEAN IP address or you must activate it with a VPN (Virtual Private Network) in order to play Civilization 5 Brave New World. Might have languages restrictions or language packs. Read the description on the store game page to know if the EU IP is only needed for activation or for playing also (maybe on EU Servers). Most of the stores offer you their help, or show you how to do this with a tutorial to follow.
STEAM GIFT : A Steam gift is a one-time transfer you receive. You activate and install Civilization 5 Brave New World to play on Steam, it is a non-refundable game that stays in your Steam games collection. Please read the store description about any language or region restrictions.
STEAM CD KEY : Use the Steam Key Code on Steam Platform to download and play Civilization 5 Brave New World. You must login to your Steam Account or create one for free. Download the (Steam Client HERE). Then once you login, click Add a Game (located in the bottom Left corner) -> Activate a Product on Steam. There type in your CD Key and the game will be activated and added to your Steam account game library.
Bonus Edition
Complete Edition
DLC
DLC Pack

That is one of the most captivating series of games ever!

This is an interesting RPG game where you can create your own country on earth?
No, on planets and far away galaxies. This game offers and interesting plot and stragedy base game. Bought it at early access and i dont regret it