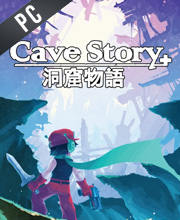 What is Cave Story+ CD key?

It's a digital key that allows you to download Cave Story+ directly to PC from the official Platforms.

How can I find the best prices for Cave Story+ CD keys?

Allkeyshop.com compares the cheapest prices of Cave Story+ on the digital downloads market to find the best sales and discount codes on trusted stores.

Cave Story is an action, adventure, indie video game developed by Nicalis and Studio Pixel and published by Nicalis.

Your character is a boy who wakes up in a cave with amnesia. He doesn’t remember anything, not even his own name. The cave he woke up in is attached to other caves and is located in a floating island which is inhabited by peaceful rabbit-like creatures called Mimigas. The very existence of these Mimigas are in danger as a crazy scientist killed most of their population looking for a powerful artifact called the Demon Crown, which is believed to wield vast magical powers.

You, without a clue in the world, find out that this is happening and in a twist of fate, becomes the only force capable of saving the remaining Mimigas. You have to explore, jump, run, fly and shoot your way through this adventure.

The game has 15 exciting levels to explore as well as six new play modes. There are also over 20 epic boss battles that you would not want to miss. Cave Story has a great original story that will make you play until you finish the game. It is full of charm and character, you’d definitely love to play this.

EPIC GAMES KEY : Region Free / Worldwide. Requires Epic Games Launcher App in order to play the game. You need to create a free account here in order to download Cave Story+ from Epic Plateform . Read the description on the store page about any language or country restrictions.
STEAM CD KEY : Use the Steam Key Code on Steam Platform to download and play Cave Story+. You must login to your Steam Account or create one for free. Download the (Steam Client HERE). Then once you login, click Add a Game (located in the bottom Left corner) -> Activate a Product on Steam. There type in your CD Key and the game will be activated and added to your Steam account game library.
EU STEAM CD KEY: Requires an EUROPEAN IP address or you must activate it with a VPN (Virtual Private Network) in order to play Cave Story+. Might have languages restrictions or language packs. Read the description on the store game page to know if the EU IP is only needed for activation or for playing also (maybe on EU Servers). Most of the stores offer you their help, or show you how to do this with a tutorial to follow.
Standard Edition. Read the store description to know the content.

Be the first one to write a review about Cave Story+ !