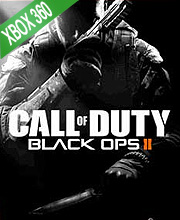 What is Call of Duty Black Ops 2 Game Code?

It's a digital key that allows you to download Call of Duty Black Ops 2 directly to Xbox 360 from Xbox Live.

Allkeyshop.com compares the cheapest prices of Call of Duty Black Ops 2 on the digital downloads market to find the best sales and discount codes on trusted stores.

Call of Duty: Black Ops II is a first-person shooter game that was published by Activision and developed by Treyarch for the Xbox 360. It ninth installment in the Call of Duty video game franchise of video games and as the name suggests, a sequel to the 2010 game Call of Duty: Black Ops. The game’s story campaign prolongs the events of the first Black Ops and is set in two different time periods; the late 1980s and 2025. In the 1980s timeline, you assume the roles of two protagonists Balck Ops, Alex Mason, and Frank Woods. In 2025, you will play as Mason’s son as you go in search of David Raul Menendez, a Nicaraguan cartel leader. Raul is responsible for kidnapping Woods in the 80s and later sparking a second Cold War in 2025 and for those actions, you seek retribution. The game’s campaign features nonlinear gameplay and has multiple endings that are influenced by players’ choice which adds to the replayable value of the game.

Good campaign. Fun game. Got to grab COD games when they are good prices as they don’t discount often on consoles.

one of the best FPS game…. can buy it especially for the zombie mode!!

one of the most favorite games, Really i love to play it individually or with my friends as a team.
I advice everyone to have the experience and enjoy playing and entertainment

Whether you are playing singleplayer, multiplayer or zombies, a lot of things seem familiar, but the novelties presented are interesting enough to give us one general recommendation. And it applies to almost all of you – fans of good action games, fans of the FPS genre and especially Call of Duty fans