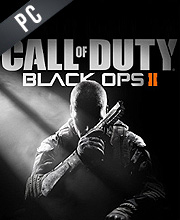 What is Call of Duty Black Ops 2 CD key?

It's a digital key that allows you to download Call of Duty Black Ops 2 directly to PC from the official Platforms.

How can I find the best prices for Call of Duty Black Ops 2 CD keys?

Allkeyshop.com compares the cheapest prices of Call of Duty Black Ops 2 on the digital downloads market to find the best sales and discount codes on trusted stores.

Call of Duty: Black Ops 2 is a first-person shooter video game developed by Treyarch and published by Activision.

Black Ops 2  is the first game in the Call of Duty series to feature future warfare technology, and the first to introduce multiple storylines driven by player decision and the ability to select weapons before starting story mode missions.

Call of Duty: Black Ops 2 sends the player into the past during the final years of the first Cold War and the near future – 21st Century Cold War – where new generation warfare is on the rise. The success or failure of these “Strike Force missions” can have consequences for the wider campaign storyline, so make outstanding results to create a path that leads to victory. Take control of the power of near-future technology to save the world from the verge of total destruction.

Black Ops 2 is by far the second best call of duty since Call of Duty 4: Modern Warfare. Single player offers so much as well as the multiplayer. Zombie mode has modes in them which gives it a much more lasting appeal and gives so much more variety and fun. It just gets better and better! With awesome graphics and epic gameplay, it’s truly a complete gaming package indeed. Definitely a game to be reckoned with.

Uncut: Uncensored version, unavailable in some countries; please refer to the seller’s website

Zoom 1m 3m 1y All
Track product
EU STEAM CD KEY: Requires an EUROPEAN IP address or you must activate it with a VPN (Virtual Private Network) in order to play Call of Duty Black Ops 2. Might have languages restrictions or language packs. Read the description on the store game page to know if the EU IP is only needed for activation or for playing also (maybe on EU Servers). Most of the stores offer you their help, or show you how to do this with a tutorial to follow.
GERMAN STEAM KEY : CD Key Steam for Germany. Usually requires German IP address to download and play Call of Duty Black Ops 2 with German Language only. The content might be different from other steam version due to content restrictions in Germany Austria and other countries. Read the store carefully about activation steps, languages and restrictions.
EUROPEAN STEAM GIFT : It’s a steam gift for Europe which requires an European IP address to activate and to play Call of Duty Black Ops 2 on Steam. Read carefully the store description about region and language restrictions.
STEAM GIFT : A Steam gift is a one-time transfer you receive. You activate and install Call of Duty Black Ops 2 to play on Steam, it is a non-refundable game that stays in your Steam games collection. Please read the store description about any language or region restrictions.
STEAM CD KEY : Use the Steam Key Code on Steam Platform to download and play Call of Duty Black Ops 2. You must login to your Steam Account or create one for free. Download the (Steam Client HERE). Then once you login, click Add a Game (located in the bottom Left corner) -> Activate a Product on Steam. There type in your CD Key and the game will be activated and added to your Steam account game library.
Bonus Edition
Bundle
Collection
Deluxe Edition
Standard Edition
Uncut Edition
Compare Choose & Buy Download (772)

BEST GAME I EVER PLAY!!!! I REALLY ENJOYED IT!!! THIS GAME HAVE AWSOME GRAPHICS!!!

this game might be old but it’s gold.
Everything was said! best store G2A