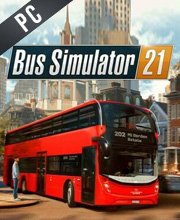 What is Bus Simulator 21 CD key?

It's a digital key that allows you to download Bus Simulator 21 directly to PC from the official Platforms.

How can I find the best prices for Bus Simulator 21 CD keys?

Allkeyshop.com compares the cheapest prices of Bus Simulator 21 on the digital downloads market to find the best sales and discount codes on trusted stores.

Bus Simulator 21 is an automobile simulation game, the sixth iteration of the much-beloved bus simulator franchise developed by stillalive an Austrian game development studio. 21 promises to be the most comprehensive game in the series yet in terms of the amount of officially licensed buses that are available for you to play with, by well-known manufacturers as well such as newcomers to the franchise Volvo, Alexander Dennis, Scania, BYD, Grande West, and Blue Bird as well as brands that have been with Bus Simulator before Mercedes-Benz, Setra, IVECO BUS, and MAN. Master the challenges of daily traffic, with an even greater degree of freedom with the open-world approach of Bus Simulator 21, explore the brand new US-based map of Angel shores and the revamped version of the European seaside map from the previous installment of the game with all of its extensions.

Bus Simulator 21 is for everyone. Being able to cater to your playstyle from the most basic of setups to as realistic as they can make it, the game gets its hooks in you after a few hours. I always wanted to run one more route before getting up from a play session. The vehicle AI leaves something to be desired, but we can all think of a few drivers that give us road rage.

Ultimately, Bus Simulator 21 does a good job – it gets the blend of a driving simulator and management simulator pretty much spot on, even if both of those individual parts have room for improvement.

This DLC contains the MAN Lion’s City 12 bus and 3 types of interior design for the bus with different color patterns and floor textures.

EU STEAM CD KEY: Requires an EUROPEAN IP address or you must activate it with a VPN (Virtual Private Network) in order to play Bus Simulator 21. Might have languages restrictions or language packs. Read the description on the store game page to know if the EU IP is only needed for activation or for playing also (maybe on EU Servers). Most of the stores offer you their help, or show you how to do this with a tutorial to follow.
STEAM GIFT : A Steam gift is a one-time transfer you receive. You activate and install Bus Simulator 21 to play on Steam, it is a non-refundable game that stays in your Steam games collection. Please read the store description about any language or region restrictions.
STEAM CD KEY : Use the Steam Key Code on Steam Platform to download and play Bus Simulator 21. You must login to your Steam Account or create one for free. Download the (Steam Client HERE). Then once you login, click Add a Game (located in the bottom Left corner) -> Activate a Product on Steam. There type in your CD Key and the game will be activated and added to your Steam account game library.
STEAM KEY ROW : It means for Rest Of the World countries which are not concerned by the region restrictions. This product can't be purchased and activated in Several countries. Please read the store description to know the full list of countries which are concerned. Use the key to Download and play Bus Simulator 21 on Steam.
Dayone Edition
Standard Edition
Compare Choose & Buy Download (689)