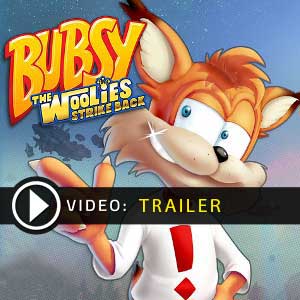 What is Bubsy The Woolies Strike Back CD key?

It's a digital key that allows you to download Bubsy The Woolies Strike Back directly to PC from the official Platforms.

How can I find the best prices for Bubsy The Woolies Strike Back CD keys?

Allkeyshop.com compares the cheapest prices of Bubsy The Woolies Strike Back on the digital downloads market to find the best sales and discount codes on trusted stores.

Bubsy The Woolies Strike Back is a platform, single player video game developed by Black Forest Games and published by UFO Interactive Games.

It was released for Microsoft Windows and PlayStation 4 and it’s the fifth entry in the Bubsy series. It returns to the 2D side-scrolling platformer gameplay from the first Bubsy games, Bubsy in Claws Encounters of the Furred Kind, Bubsy in Fractured Furry Tales, Bubsy 2, with 3D character models, a first for the entries in the series.

Follow the bobcat on a side-scrolling mission to protect Earth’s yarn from alien invaders. He has his old slow-falling glide move and a few new tricks: he can scale walls with his claws and execute a pounce to attack enemies. That is really useful.

Each stage of the game is large and filled with enemies, traps, and platforms. In terms of difficulty,the game isn’t that bad, falling from great heights doesn’t hurt and levels have many T-shirt pickups that give you extra lives.

GOG.COM CD KEY : You need to register on Gog.com, then use the GOG Key to download and activate your game to play Bubsy The Woolies Strike Back.
EUROPEAN STEAM GIFT : It’s a steam gift for Europe which requires an European IP address to activate and to play Bubsy The Woolies Strike Back on Steam. Read carefully the store description about region and language restrictions.
STEAM CD KEY : Use the Steam Key Code on Steam Platform to download and play Bubsy The Woolies Strike Back. You must login to your Steam Account or create one for free. Download the (Steam Client HERE). Then once you login, click Add a Game (located in the bottom Left corner) -> Activate a Product on Steam. There type in your CD Key and the game will be activated and added to your Steam account game library.
Standard Edition