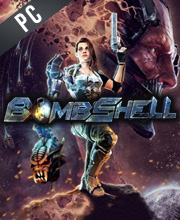 What is Bombshell CD key?

It's a digital key that allows you to download Bombshell directly to PC from the official Platforms.

How can I find the best prices for Bombshell CD keys?

Allkeyshop.com compares the cheapest prices of Bombshell on the digital downloads market to find the best sales and discount codes on trusted stores.

Bombshell is an action/RPG video game,developed by Interceptor Entretainement and edited by 3D Realms.

You can control Shelly ”Bombshell” Harrison, a colonel of the Global Defense Force, whose career, as a specialist in explosives, ended abruptly after an event entitled ”Washington incident”, which caused him to lose his arm and his team.

Shelly received a new contract by a private military contractor and a new mechanical arm for accomplish his mission which is no other than to save the president, his captors were careful to hide on one of the four planets that you’ll have to visit to find him as quickly as possible while spreading your way extraterrestrials explosives, bionic slap or any weapon such as the flamethrower, the rocket launchers, heavy machine guns, short panoply of the perfect commando ready to fight without leaving any contrary opinions.

The game has the unreal engine 3 and will delight you with sets from another world (in this case four) beautiful and a reactive gameplay for fun to do battle with bosses as high like buildings, which will make you most certainly a difficult life but you will manage to reduce them to silence thanks to the physical abilities and any kind of offensive or defensive action that Shelly has, these being a pleasant fluidity. Take control of this “bomb” figuratively as in the proper sense for a constant pleasure to see her get rid of his opponents with grace and strength.

Zoom 1m 3m 1y All
Track product
GOG.COM CD KEY : You need to register on Gog.com, then use the GOG Key to download and activate your game to play Bombshell.
STEAM CD KEY : Use the Steam Key Code on Steam Platform to download and play Bombshell. You must login to your Steam Account or create one for free. Download the (Steam Client HERE). Then once you login, click Add a Game (located in the bottom Left corner) -> Activate a Product on Steam. There type in your CD Key and the game will be activated and added to your Steam account game library.
STEAM KEY ROW : It means for Rest Of the World countries which are not concerned by the region restrictions. This product can't be purchased and activated in Several countries. Please read the store description to know the full list of countries which are concerned. Use the key to Download and play Bombshell on Steam.
Deluxe Edition
Standard Edition
Compare Choose & Buy Download (743)

G2A is the Best Store to buy Bombshell CD Key, This is awesome game

g2a is the best store for bombshell cd key.This is very good game and good store thank you allkeyshop