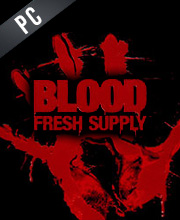 It's a digital key that allows you to download Blood Fresh Supply directly to PC from the official Platforms.

How can I find the best prices for Blood Fresh Supply CD keys?

Allkeyshop.com compares the cheapest prices of Blood Fresh Supply on the digital downloads market to find the best sales and discount codes on trusted stores.

STEAM CD KEY : Use the Steam Key Code on Steam Platform to download and play Blood Fresh Supply. You must login to your Steam Account or create one for free. Download the (Steam Client HERE). Then once you login, click Add a Game (located in the bottom Left corner) -> Activate a Product on Steam. There type in your CD Key and the game will be activated and added to your Steam account game library.
EUROPEAN STEAM GIFT : It’s a steam gift for Europe which requires an European IP address to activate and to play Blood Fresh Supply on Steam. Read carefully the store description about region and language restrictions.
GOG.COM CD KEY : You need to register on Gog.com, then use the GOG Key to download and activate your game to play Blood Fresh Supply.
STEAM GIFT : A Steam gift is a one-time transfer you receive. You activate and install Blood Fresh Supply to play on Steam, it is a non-refundable game that stays in your Steam games collection. Please read the store description about any language or region restrictions.
Standard Edition. Read the store description to know the content.

Blood is back, thanks to the guys at Nightdive Studios!

Part of the Holy Trinity of the Build Engine, Blood focuses on the horror genre, and oh boy! The atmosphere in most of the levels is really charming yet tense, heavily helped by the various sounds and the soundtrack. Set in an unspecified period between the late 19th and the early 20th century, the player takes the role of Caleb, once a commander of the cult "The Cabal", seeking revenge after being betrayed and killed by the God, Tchernobog, he once worshipped.

Caleb will go through 4 Episodes + 2 (Plasma Pak and Cryptic Passage), in which he'll face several enemies, undead, cultists, hellhounds, gill beasts, gargoyles, etc. ending each Episodes with a Boss Fight. On the highest difficulties you'll also have trouble with your typical cultist as they'll mercilessly throw everything at you! So it's a good thing to learn soon what their weaknesses are or what weapons are the best against certain enemies! Overall the difficulty in Plasma Pak is huge compared to the 4th episode, but it also manages to be the most satisfying episode!

Speaking of weapons, there is a good variety, from your typical melee, throwing, shotgun and rifle to the much obscure magical ones all including a secondary fire mode(except the pitchfork)! The weapons are all really fun to use and some even quite original, they'll keep you entertained the whole time as Blood is quite challenging at times, you'll also find enough situations to use most of them, as certain weapons will have a result than another.

Level design is top-notch, all fun, and unique! Tons of secrets and funny easter eggs that will manage to get a smile out of you! Blood also sports a customizable Co-op mode to go across teh various episodes, and the Bloodbath, your typical deathmatch! For several hours of fun.

The game DO suffer from issues from time to time, but the developers are really passionate about Blood and release fixes as well as beta updates. Keep in mind that updating will cause to corrupt your saves, so keep that in mind when an update is available (and uncheck the always updated option for Blood).