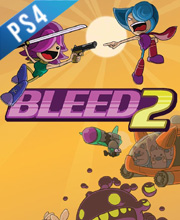 What is Bleed 2 Game Code?

It's a digital key that allows you to download Bleed 2 directly to Playstation 4 from PSN (Playstation network).

Allkeyshop.com compares the cheapest prices of Bleed 2 on the digital downloads market to find the best sales and discount codes on trusted stores.

Bleed 2 is a run and gun style shoot ’em up game made by indie developer Ian Campbell the sequel to his first game Bleed, Wyrn after the events of the first game is now earth’s only official superhero but now a new villain has invaded earth psychic girl named valentine, her posse of alien invaders, and some familiar faces, it’s time to prove your title as earth’s greatest hero of all time.

For fans of fast-paced, over-the-top twin-stick action, complete with bullet time and a scoring system that awards perfection, Bleed 2 is excellent. The only real issue is its length, which is remedied to an extent by additional characters, weapons, and modes. If arcade, Contra/Metal Slug action is your thing and you’ve been missing it, you could do much worse than Bleed 2.

While Bleed 2 doesn’t exactly break new ground in the 2D side-scroller action-adventure genre, it stays true to the classic games it was modeled after. Despite a few small stumbles along the way, this sequel really does a lot to capture the hearts of anyone willing to try it. Bleed 2 is, quite simply put, intense fun bundled up into a small package.

This Edition contains both games from the bleed franchise Bleed and Bleed 2.

This Edition contains the base game for Bleed 2 and the bonus digital accessories.