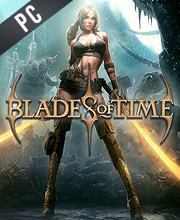 What is Blades Of Time CD key?

It's a digital key that allows you to download Blades Of Time directly to PC from the official Platforms.

How can I find the best prices for Blades Of Time CD keys?

Allkeyshop.com compares the cheapest prices of Blades Of Time on the digital downloads market to find the best sales and discount codes on trusted stores.

Blades of Time is an action adventure hack-and-slash videogame developed by Gaijin Entertainment and published by Konami.

Play as the stunning gunsword -wielding treasure hunter named Ayumi. You find yourself stuck in an ancient island while looking for treasure and new adventures. The island is quite rich in bounty, however, rich islands like this don’t come easy.

It is plagued by the throes of Chaos magic. Your journey will not be easy because traps and multitudes of enemies abound as you try to escape the grasp of the island. The island is also home to special powers that you can actually gain for yourself.

You have to go through a lot of enemies as well as puzzle solving scenarios throughout the game. Ayumi has the ability to go back in time and place a clone of herself to replicate her previous actions.

This ability is very helpful especially in solving puzzles. She also has a dash ability that she can use when fighting and as well as to get out of tight spots. As the game progresses there will be more than 40 skill sets and magic that you can acquire.

Help Ayumi escape the deadly island with skills, abilities and loot in tow.

Zoom 1m 3m 1y All
Track product
GOG.COM CD KEY : You need to register on Gog.com, then use the GOG Key to download and activate your game to play Blades Of Time.
EU STEAM CD KEY: Requires an EUROPEAN IP address or you must activate it with a VPN (Virtual Private Network) in order to play Blades Of Time. Might have languages restrictions or language packs. Read the description on the store game page to know if the EU IP is only needed for activation or for playing also (maybe on EU Servers). Most of the stores offer you their help, or show you how to do this with a tutorial to follow.
STEAM CD KEY : Use the Steam Key Code on Steam Platform to download and play Blades Of Time. You must login to your Steam Account or create one for free. Download the (Steam Client HERE). Then once you login, click Add a Game (located in the bottom Left corner) -> Activate a Product on Steam. There type in your CD Key and the game will be activated and added to your Steam account game library.
Limited Edition
Standard Edition
Compare Choose & Buy Download (803)