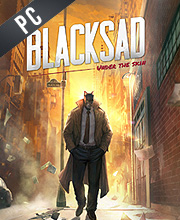 What is Blacksad Under the Skin CD key?

It's a digital key that allows you to download Blacksad Under the Skin directly to PC from the official Platforms.

How can I find the best prices for Blacksad Under the Skin CD keys?

Allkeyshop.com compares the cheapest prices of Blacksad Under the Skin on the digital downloads market to find the best sales and discount codes on trusted stores.

Blacksad: Under The Skin is an adventure, puzzle game that is developed by Pendulo Studios and published by Microids.

An all-new story for Blacksad is here and it is set in the 1950s. An owner of a boxing club named Joe Dunn has been found dead. A rising boxing star named Robert Yale has mysteriously vanished and he has an upcoming fight that could literally change his career. The daughter of Joe, Sonia Dunn takes over the boxing club and is left with a lot of problems. She then hires private detective John Blacksad to look into the situation.

The game is filled with anthropomorphic characters with some familiar faces. Offering a narrative gameplay with puzzles, investigations, multiple choice dialogue and some quick time events.

Step into an immersive world with the incredible 50’s feel and jazz soundtrack rivaling the noir films of Hollywood.

Blacksad: Under The Skin offers a dark world where you will uncover the corruption and the scandals of New York.

STEAM CD KEY : Use the Steam Key Code on Steam Platform to download and play Blacksad Under the Skin. You must login to your Steam Account or create one for free. Download the (Steam Client HERE). Then once you login, click Add a Game (located in the bottom Left corner) -> Activate a Product on Steam. There type in your CD Key and the game will be activated and added to your Steam account game library.
EU STEAM CD KEY: Requires an EUROPEAN IP address or you must activate it with a VPN (Virtual Private Network) in order to play Blacksad Under the Skin. Might have languages restrictions or language packs. Read the description on the store game page to know if the EU IP is only needed for activation or for playing also (maybe on EU Servers). Most of the stores offer you their help, or show you how to do this with a tutorial to follow.
EUROPEAN STEAM GIFT : It’s a steam gift for Europe which requires an European IP address to activate and to play Blacksad Under the Skin on Steam. Read carefully the store description about region and language restrictions.
GOG.COM CD KEY : You need to register on Gog.com, then use the GOG Key to download and activate your game to play Blacksad Under the Skin.
Standard Edition. Read the store description to know the content.

Be the first one to write a review about Blacksad Under the Skin !

Can I get an opinion about someone who actually read the graphic novels? I imagine being a fan significantly alters your perception of the game, and would like to know how much it draws from the source material. Wether it’s based on a specific book, makes references to it or is just a brand new story.

I saw the Graphic novel long time a go I didn’t really know they had made the game.

An adventure game that looks interesting, but this is not my type of game.

Looks interesting with the anthropomorphs (makes me think it has comedy, but clearly it’s a serious game), but seems overpriced for what it is – shouldn’t be more than €15 imho…