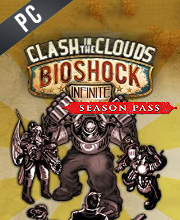 What is BioShock Infinite Clash in the Clouds DLC CD key?

It's a digital key that allows you to download BioShock Infinite Clash in the Clouds DLC directly to PC from the official Platforms.

How can I find the best prices for BioShock Infinite Clash in the Clouds DLC CD keys?

Allkeyshop.com compares the cheapest prices of BioShock Infinite Clash in the Clouds DLC on the digital downloads market to find the best sales and discount codes on trusted stores.

Bioshock Infinite: Clash In The Clouds is an action video game developed by Irrational Games Aspyr and Virtual Programming and published by Aspyr.

In a wave-based arena game you will be put to battle against combinations of enemies in four maps inspired from sections of Columbia. Defeating enemies earns you cash and points which will move you up the leaderboard and used to purchase weapons and upgrades. While the challenges begin easy enough they soon increase in difficulty and will test your abilities as the tasks before you become more and more complicated.

While the length of the game may not be great this provides a great bridge between Bioshock games and is enjoyable when replaying competitions. Play by your self or challenge friends to beat your scores and see who can achieve the greatest success.

STEAM CD KEY : Use the Steam Key Code on Steam Platform to download and play Bioshock Infinite Clash In The Clouds. You must login to your Steam Account or create one for free. Download the (Steam Client HERE). Then once you login, click Add a Game (located in the bottom Left corner) -> Activate a Product on Steam. There type in your CD Key and the game will be activated and added to your Steam account game library.
EU STEAM CD KEY: Requires an EUROPEAN IP address or you must activate it with a VPN (Virtual Private Network) in order to play Bioshock Infinite Clash In The Clouds. Might have languages restrictions or language packs. Read the description on the store game page to know if the EU IP is only needed for activation or for playing also (maybe on EU Servers). Most of the stores offer you their help, or show you how to do this with a tutorial to follow.
DLC

Be the first one to write a review about BioShock Infinite Clash in the Clouds DLC !