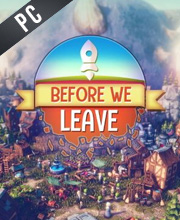 What is Before We Leave CD key?

It's a digital key that allows you to download Before We Leave directly to PC from the official Platforms.

How can I find the best prices for Before We Leave CD keys?

Allkeyshop.com compares the cheapest prices of Before We Leave on the digital downloads market to find the best sales and discount codes on trusted stores.

Create your own world with Before We Leave, a non-violent city-building game. Build your own city on different planets, a safe place to live for the peeps. The peeps have stayed underground for centuries, and they are yet to resurface the face of this world. It is your duty to guide and help them get through the evolution phase and restart their lives above where they can feel the touch of the sun, the cozy breeze of the seas, the emerging communities, a system of happiness, and many many more!

Before We Leave is a civilization management game that’s relatively stress-free, calming, and really charming. Its low-key nature and philosophy make it great for those who feel overwhelmed by the laundry list of responsibilities of 4X-style management and development. The design is sound, the presentation is fantastic and I’m a huge fan of the hex-gridded world map represented as a 3D globe. The individual models of the Peeps and their architecture are so charming, and the soothing soundtrack that plays when running the time at max speed is really nice. There are areas of the game that feel a little rough around the edges but the updates show a commitment by the developer to bring in the right amount of polish that’ll lead it toward greater heights of inventive fun.

A paradoxically relaxing and overwhelming game, Before We Leave is a cute city builder with a lot of depth.

Before We Leave’s a surprisingly well-optimized, visually pleasing, and refreshingly relaxing city builder that excels at making players feel like reclaimers of a massive, interplanetary empire, but it has many gameplay issues to iron out in its full release before it can live up to its own ambitions. The gripes noted herein are all present in an alpha build, so it’s possible that Balancing Monkey already addressed these and other concerns between then and now. If not, though, the subtle makings of a personality may not be able to atone for the fact that its mysterious, mellow tone is undermined by frequent annoyances.

Before We Leave Deluxe Edition is the base game bundled with the official soundtrack, a collection of 36 tracks composed and produced by award-winning composer Benedict Nichols.

Zoom 1m 3m 1y All
Track product
EPIC GAMES KEY : Region Free / Worldwide. Requires Epic Games Launcher App in order to play the game. You need to create a free account here in order to download Before We Leave from Epic Plateform . Read the description on the store page about any language or country restrictions.
EU STEAM CD KEY: Requires an EUROPEAN IP address or you must activate it with a VPN (Virtual Private Network) in order to play Before We Leave. Might have languages restrictions or language packs. Read the description on the store game page to know if the EU IP is only needed for activation or for playing also (maybe on EU Servers). Most of the stores offer you their help, or show you how to do this with a tutorial to follow.
STEAM GIFT : A Steam gift is a one-time transfer you receive. You activate and install Before We Leave to play on Steam, it is a non-refundable game that stays in your Steam games collection. Please read the store description about any language or region restrictions.
STEAM CD KEY : Use the Steam Key Code on Steam Platform to download and play Before We Leave. You must login to your Steam Account or create one for free. Download the (Steam Client HERE). Then once you login, click Add a Game (located in the bottom Left corner) -> Activate a Product on Steam. There type in your CD Key and the game will be activated and added to your Steam account game library.
STEAM KEY ROW : It means for Rest Of the World countries which are not concerned by the region restrictions. This product can't be purchased and activated in Several countries. Please read the store description to know the full list of countries which are concerned. Use the key to Download and play Before We Leave on Steam.
Deluxe Edition
Standard Edition
Compare Choose & Buy Download (772)