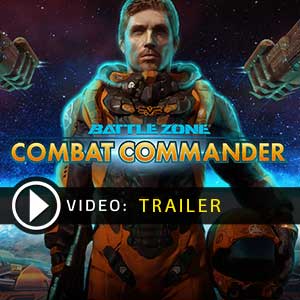 It's a digital key that allows you to download Battlezone Combat Commander directly to PC from the official Platforms.

How can I find the best prices for Battlezone Combat Commander CD keys?

Allkeyshop.com compares the cheapest prices of Battlezone Combat Commander on the digital downloads market to find the best sales and discount codes on trusted stores.

Battlezone: Combat Commander is an action, strategy video game that is developed by Big Boat Interactive and published by Rebellion.

An impending alien attack is upon us so US and Russia who were once enemies on the space race put their differences aside and unite their forces against the imminent danger.

Get to control over 30 unique unit types and fight across 24 intense missions with 6 exotic living worlds.

Now, players are able to experience advanced AI where units are able to improve as well as gain combat experience. Visuals have also been remastered with shader-based rendering as well as a completely retextured and upscaled terrain.

A mod support is also available for single player as well as multiplayer maps, vehicles, assets, HUDs, and custom scripts.

Take command and make sure to win the war against the alien attack.

GOG.COM CD KEY : You need to register on Gog.com, then use the GOG Key to download and activate your game to play Battlezone Combat Commander.
EUROPEAN STEAM GIFT : It’s a steam gift for Europe which requires an European IP address to activate and to play Battlezone Combat Commander on Steam. Read carefully the store description about region and language restrictions.
STEAM CD KEY : Use the Steam Key Code on Steam Platform to download and play Battlezone Combat Commander. You must login to your Steam Account or create one for free. Download the (Steam Client HERE). Then once you login, click Add a Game (located in the bottom Left corner) -> Activate a Product on Steam. There type in your CD Key and the game will be activated and added to your Steam account game library.
Bundle
Gold Edition
Standard Edition