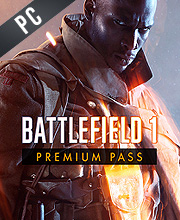 It's a digital key that allows you to download Battlefield 1 Premium Pass directly to PC from the official Platforms.

How can I find the best prices for Battlefield 1 Premium Pass CD keys?

Allkeyshop.com compares the cheapest prices of Battlefield 1 Premium Pass on the digital downloads market to find the best sales and discount codes on trusted stores.

EU ORIGIN CD KEY (EUROPEAN ORIGIN CD KEY): Requires an European IP address or you must activate it with a VPN (Virtual Private Network) in order to play Battlefield 1 Premium Pass. Might have languages restrictions or language packs. Read the description on the store game page to know if the EU IP is only needed for activation or for playing also (maybe on EU Servers). Most of the stores offer you their help, or show you how to do this with a tutorial to follow.
ORIGIN CD KEY : Use the Origin Key Code (Electronic Arts - EA) on Origin Platform to download and play Battlefield 1 Premium Pass. You have to login to your Origin Account or create one for free. Download and install the Origin Software HERE) then you can activate the game on it. Once installed, start Origin, click on the Origin Tab and click on Redeem Product Code and just enter the key. The game will appear in your My games list.
ORIGIN KEY ROW : It means for Rest Of the World countries which are not concerned by the region restrictions. This product can't be purchased and activated in Several countries. Please read the store description to know the full list of countries which are concerned. Use the key to Download and play Battlefield 1 Premium Pass on Origin.
Bundle
DLC

best game ever !! i love it !!even the graphics are good !!! i like war games so much !!! and i realy wanna win this game

bf 1 is great game i loved it so much ;3 thx allkeyshop

Oh man, maybe this does worth 40 euros but it’s too much for me, pity.

So hoping to win a lottery for standard game so I would buy this!!

don’t worry wait till its $30 with premium included , get it on christmas