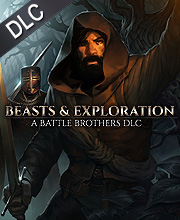 It's a digital key that allows you to download Battle Brothers Beasts & Exploration directly to PC from the official Platforms.

How can I find the best prices for Battle Brothers Beasts & Exploration CD keys?

Allkeyshop.com compares the cheapest prices of Battle Brothers Beasts & Exploration on the digital downloads market to find the best sales and discount codes on trusted stores.

Battle Brothers – Beasts & Exploration is a strategy, role-playing video game that is developed by Overhype studios. This is a downloadable content so the base game Battle Brothers is needed to play.

This brand new DLC for Battle Brothers offers a world that is 25% larger giving players new possibilities, lore, and adventure. New opponents are also available having five new beasts and three epic bosses. Get to craft items from the beasts that you have slain, creating cloaks, armor plating, shields, potion and so much more. With the new crafting system also comes the ability to customize your gear like having shoulder guards, cloaks, a new armor attachment system as well as coloring your shields with the new paint item.

There will also be new armor and weapons that will allow you to create your playstyle and character builds. New contracts, ambitions, and events are also listed in what you will be getting with this expansion plus new music and new achievement.