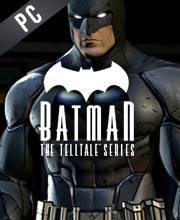 What is Batman The Telltale Series CD key?

It's a digital key that allows you to download Batman The Telltale Series directly to PC from the official Platforms.

How can I find the best prices for Batman The Telltale Series CD keys?

Allkeyshop.com compares the cheapest prices of Batman The Telltale Series on the digital downloads market to find the best sales and discount codes on trusted stores.

Take the role of Batman, both as the fearless hero as well as Bruce Wayne. The game is based on the popular Batman comic book series by Bill Finger and Bob Kane. However, the game is set after the events when Bruce Wayne decides to become Batman since a flexibility in writing and gameplay is needed to remove the ties of previous established narratives.

Since the game is a Telltale Series, you will be experiencing a branching narrative, answering the “what could’ve beens?” in the game. Option will be given to the player that will lead to a different future, events in the game.

As Batman or Bruce Wayne, you will be investigating some series sequences and bring to use your detective skills to solve puzzles.

Also get to experience the new feature “Crowd Play” where an audience can help you in playing your game.

GOG.COM CD KEY : You need to register on Gog.com, then use the GOG Key to download and activate your game to play Batman The Telltale Series.
PUBLISHER WEBSITE CD KEY: Use the CD Key Code to download directly on the Official Website or from the store to play Batman The Telltale Series. Follow the instructions given by the store. Verify languages available and possible region restrictions before buying.
EU STEAM CD KEY: Requires an EUROPEAN IP address or you must activate it with a VPN (Virtual Private Network) in order to play Batman The Telltale Series. Might have languages restrictions or language packs. Read the description on the store game page to know if the EU IP is only needed for activation or for playing also (maybe on EU Servers). Most of the stores offer you their help, or show you how to do this with a tutorial to follow.
STEAM CD KEY : Use the Steam Key Code on Steam Platform to download and play Batman The Telltale Series. You must login to your Steam Account or create one for free. Download the (Steam Client HERE). Then once you login, click Add a Game (located in the bottom Left corner) -> Activate a Product on Steam. There type in your CD Key and the game will be activated and added to your Steam account game library.
Limited Edition
Special Edition
Standard Edition