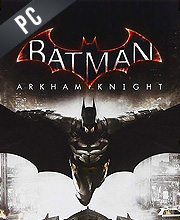 It's a digital key that allows you to download Batman Arkham Knight directly to PC from the official Platforms.

How can I find the best prices for Batman Arkham Knight CD keys?

Allkeyshop.com compares the cheapest prices of Batman Arkham Knight on the digital downloads market to find the best sales and discount codes on trusted stores.

The game map is 5 times larger than that of the previous game. Batman can now use the Batmobile to fight and move.

The game begins one year after the events of Batman Arkham City, Ghotam crime is at its lowest. However, the scarecrow is back and attacking the city with its gas. The police abandoned the city and evacuate the population. The biggest criminals of Gotham then form an alliance to take control of the city and elect Arkham Knight to ensure that it remains under their control. Batman decides to save the city one more time.

Batman Arkham Knight is the final installment, it will be the darkest and most violent game in the series, with a hero pushed to its extreme limits in fighting against the protective elected Arkham Knight who strangely resembles Batman ..

This final episode promises to be the best in the series, both visually and in terms of the content, not to be missed!

Zoom 1m 3m 1y All
Track product
EPIC GAMES KEY : Region Free / Worldwide. Requires Epic Games Launcher App in order to play the game. You need to create a free account here in order to download Batman Arkham Knight from Epic Plateform . Read the description on the store page about any language or country restrictions.
GOG.COM CD KEY : You need to register on Gog.com, then use the GOG Key to download and activate your game to play Batman Arkham Knight.
EU STEAM CD KEY: Requires an EUROPEAN IP address or you must activate it with a VPN (Virtual Private Network) in order to play Batman Arkham Knight. Might have languages restrictions or language packs. Read the description on the store game page to know if the EU IP is only needed for activation or for playing also (maybe on EU Servers). Most of the stores offer you their help, or show you how to do this with a tutorial to follow.
STEAM CD KEY : Use the Steam Key Code on Steam Platform to download and play Batman Arkham Knight. You must login to your Steam Account or create one for free. Download the (Steam Client HERE). Then once you login, click Add a Game (located in the bottom Left corner) -> Activate a Product on Steam. There type in your CD Key and the game will be activated and added to your Steam account game library.
STEAM KEY ROW : It means for Rest Of the World countries which are not concerned by the region restrictions. This product can't be purchased and activated in Several countries. Please read the store description to know the full list of countries which are concerned. Use the key to Download and play Batman Arkham Knight on Steam.
Bonus Edition
Collection
Collector Edition
Premium Edition
Standard Edition
Compare Choose & Buy Download (743)

Buying it today! Loved all the earlier ones in Arkham-series. Graphics and mapsize seems improved.

Epic game. Story is a little worse than Asylum and City, but still a really cool game. Also you get to drive the Batmobile :O.

The best game in the series. Amazing plot, graphics, mechanics to feel a real Batman experience. Sadly is the last title of the trilogy.

It may not be the best in the series but it is one of my favorites. Very good kinematics but not too much innovation on new features. Anyway, super recommended.