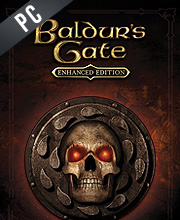 It's a digital key that allows you to download Baldur's Gate Enhanced Edition directly to PC from the official Platforms.

How can I find the best prices for Baldur's Gate Enhanced Edition CD keys?

Allkeyshop.com compares the cheapest prices of Baldur's Gate Enhanced Edition on the digital downloads market to find the best sales and discount codes on trusted stores.

It was developed by Overhaul Games and published by Atari. It’s a great chance for all the fans out there to relive history of the old-school western RPG with enhanced graphics and a better interface, making this a great remaster of an immortal classic.

The game is truly a masterpiece. Despite its beauty, tactical depth and great story, the game is not really as serious as it looks. This cannot be said of many other leading RPG titles, which of course take the game rather seriously. If you like RPGs and have not played Baldur’s Gate, then this is an absolute must!

Along the lines of the original game, if features over 400 improvements including new characters, new adventures and a new collection of character voice sets. Not only that, it has native support for high-resolution widescreen displays for that REAL High Definition feel.

Baldur’s Gate Enhanced Edition is not a game to be missed. With an epic story, memorable characters, hundreds of hours of dungeon crawling, questing and adventuring, Baldur’s Gate stands tall among the classics.

One of the great rpg games. It has a lot of D&D things on it.

Memories of spending hours re-rolling to get the perfect score. This game not only defined my childhood, but drove me into game development and my current job. The graphics are a bit dated and the gameplay might be a bit slow for most people, but there’s a beautiful story filled with loveable characters worth experiencing.