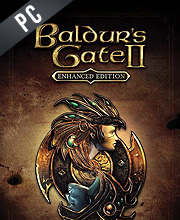 It's a digital key that allows you to download Baldurs Gate 2 Enhanced Edition directly to PC from the official Platforms.

How can I find the best prices for Baldurs Gate 2 Enhanced Edition CD keys?

Allkeyshop.com compares the cheapest prices of Baldurs Gate 2 Enhanced Edition on the digital downloads market to find the best sales and discount codes on trusted stores.

Baldurs Gate 2 Enhanced Edition is an RPG game published and developed by Overhaul Games. It is playable solo, multiplayer and cooperative online multiplayer.

The game takes place as Baldur’s Gate II: Shadows of Amn and its extension, Baldur’s Gate II: Throne of Bhaal as well as the bases of the first installment of the saga.You choose a character class and will have to improve his skills and characteristics additionally a existing character may be imported from Baldur’s Gate or Tales of the Sword Coast. The quests with the new characters are excellent, new environments are beautiful and interesting dialogues are loyal to the old version, but with a little more freedom of choice.

Many bugs have been fixed in this release that includes the NPCs and more. The game also has a new interface.

Overall, for the new and old players, this installment is almost essential: the new benefit from the older and successful versions, and veterans gamers of the franchise rediscover their favorite game again!

Exellent old game, many characters, quests and huge world, one of the best of its type.

Great game. I just started playing the Enhanced Edition after previously having played the original, and It’s even better than the original. Can’t wait to keep playing.