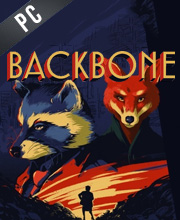 What is Backbone CD key?

It's a digital key that allows you to download Backbone directly to PC from the official Platforms.

How can I find the best prices for Backbone CD keys?

Allkeyshop.com compares the cheapest prices of Backbone on the digital downloads market to find the best sales and discount codes on trusted stores.

Backbone is a neo-noir inspired detective adventure game set in the far future of dystopian Vancouver in it you will play as Howard Lotor a raccoon private eye, scraping by on getting small-time cases for years until now that is, when what he thought was just another small-time case unravels into something much darker and sinister.

Howard’s journey ends far, far away from where it began and each step continuously develops the emotional investment for everyone in this world. While there are minor mechanical issues such as the “interact” input not always being immediately responsive, each element of Backbone is polished and expertly crafted.

Backbone features a compelling story and a well-realized post-noir dystopia, with engaging characters and some smart gameplay.

Artifact Edition contains the base game, the game’s original soundtrack with 30 songs in total, and the Worlds DLC a collection of documents acting as a director’s commentary on the making of the game.

EPIC GAMES KEY : Region Free / Worldwide. Requires Epic Games Launcher App in order to play the game. You need to create a free account here in order to download Backbone from Epic Plateform . Read the description on the store page about any language or country restrictions.
GOG.COM CD KEY : You need to register on Gog.com, then use the GOG Key to download and activate your game to play Backbone.
EU STEAM CD KEY: Requires an EUROPEAN IP address or you must activate it with a VPN (Virtual Private Network) in order to play Backbone. Might have languages restrictions or language packs. Read the description on the store game page to know if the EU IP is only needed for activation or for playing also (maybe on EU Servers). Most of the stores offer you their help, or show you how to do this with a tutorial to follow.
EUROPEAN STEAM GIFT : It’s a steam gift for Europe which requires an European IP address to activate and to play Backbone on Steam. Read carefully the store description about region and language restrictions.
STEAM GIFT : A Steam gift is a one-time transfer you receive. You activate and install Backbone to play on Steam, it is a non-refundable game that stays in your Steam games collection. Please read the store description about any language or region restrictions.
STEAM CD KEY : Use the Steam Key Code on Steam Platform to download and play Backbone. You must login to your Steam Account or create one for free. Download the (Steam Client HERE). Then once you login, click Add a Game (located in the bottom Left corner) -> Activate a Product on Steam. There type in your CD Key and the game will be activated and added to your Steam account game library.
STEAM KEY ROW : It means for Rest Of the World countries which are not concerned by the region restrictions. This product can't be purchased and activated in Several countries. Please read the store description to know the full list of countries which are concerned. Use the key to Download and play Backbone on Steam.
Windows 10 Global : This is an Worldwide Microsoft code to play on PC for Worldwide . You need to have installed Windows 10 Anniversary Edition update on your PC. Log into your Microsoft account to download and play. Read closely the description given by the store to activate your game.
Artifact Edition
Standard Edition